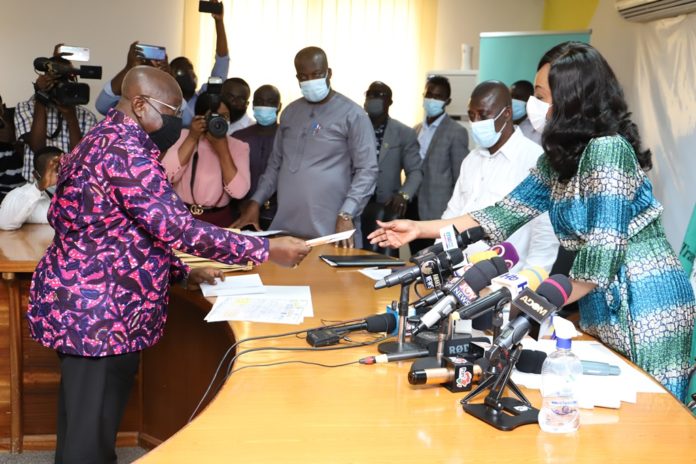 Flagbearers of two political parties today filed their nominations at the Electoral Commission to contest in the December 7, 2020 polls.

Receiving the nomination forms of Madam Dzogbenuku, Mrs Jean Mensa, the EC Chairperson, commended her for successfully going through the process.

Before she received the Forms from the NDC, Mrs Mensah said she would have wished the Party’s presidential aspirant had called personally at the Commission to file to enable him to express his concerns as had been carried in the media.

She said the process was one of the most important activities towards the December 7 Elections and that it was in consonant with Regulation Seven of the C.I. 127 that enjoined a Presidential Candidate to complete and sign four copies of the Nomination Forms among other things.

She said as part of the Commission’s efforts to ensure a transparent, credible and fair process, it had developed a detailed checklist that embodied the criteria to be satisfied by the presidential candidates as prescribed by law.

“The template will guide the scoring and awarding of marks by teams established by the Commission to scrutinise and review each of the Nomination Forms submitted,” she said.

This year, the Commission has set up two teams tasked to review all the forms submitted, namely the Technical Team and IT Team.

The Technical Team has been tasked to scrutinise the forms to ensure that the presidential candidates meet the qualifications as set out in the law.

The IT Team, on the other hand, had been charged with the responsibility of scrutinising all the Voter IDs of the presidential candidates and their supporters to verify their authenticity.

Mrs Mensah expressed the confidence that the five-day period provided for the filing process, as opposed to the two days provided in previous nomination processes, would give the candidates enough time to correct any error identified on their forms.

Madam Dzogbenuku appealed to the EC to consider a discount on the filing fee for women to encourage more female participation in the conduct of public affairs.

In response, Mrs Mensa said the issue had been considered but no decision had been taken yet, adding: “The concerns will be looked at”.

So far five presidential aspirants have filed their nomination to contest in the elections.

I will render my unwavering support for NDC – Alhaji Adams