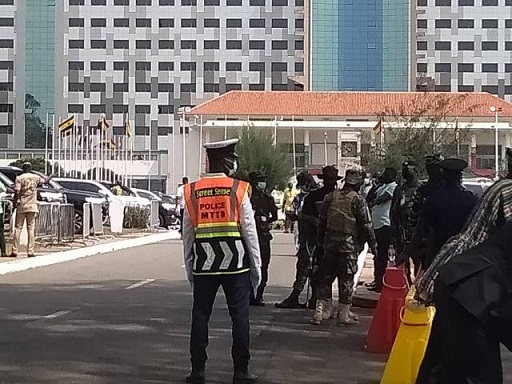 There is a calm atmosphere at the Forecourt of Parliament, where tents have been erected for the swearing-in ceremony of President-elect, Nana Addo Dankwa Akufo-Addo and Vice President-elect, Dr Mahamudu Bawumia.

Invited guests are being ushered in whilst dance troupes are playing traditional and patriotic songs to welcome them.

Some guests are also viewing the ceremonial horses tied to trees within the enclave of the ceremony and taking photographs.

The usual fanfare that greeted the Swearing-in ceremonies of Presidents, with large number of supporters and sympathizers of the winning party adorned in the Party’s paraphernalia is quite absent.

Most of the invited guests GNA spotted were wearing white apparel and traditional Kente outfits, with the national colours-red, gold.

The Military and the Police were smartly dressed in their ceremonial outfits. The ceremony, which was initially scheduled to start at 1100 hours, would now begin at 12 noon due to the prolonged parliamentary session to elect the leaders of the house.