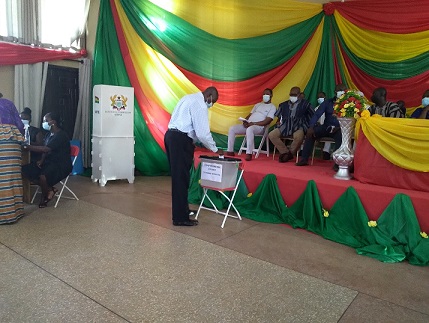 The President’s Nominee for Municipal Chief Executive (MCE) position for Techiman South, Mr Benjamin Yaw Gyarko has received approval from the 46 Assembly Members with 39 yes and seven no votes respectively.

The figures represented 86.7 per cent in favour and 13.3 against the MCE in an election conducted and supervised by the Municipal Office of the Electoral Commission.

Addressing the assembly members, Mr Kwasi Adu Gyan, the Bono East Regional Minister described the MCE as a proactive and determined person who could work to promote the President’s development agenda and urged the assembly members to support him for a successful tenure.

Mr Gyarko assured the practice of an open door and all-inclusive administration to enable persons at the grassroots level to participate in the decision-making process for uniformed development of the area.

He noted the youth were the driving force for national development, saying, he would thus be committed to empowering them through effective communication with stakeholders to sustain government flagship programmes which were the surest way to improve their livelihoods in the area.