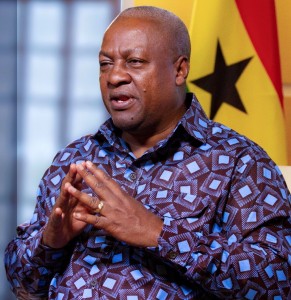 He said issues such as terrorism, climate change, tidal waves and interconnectivity were paramount in growth and development and, therefore, needed full participation from all especially the religious leaders due to their huge following.

President Mahama, who was having a breakfast meeting with religious leaders at Wa as part of his two-day “Accounting to the People” tour of the Upper West Region, said the world had become a global village and it was only full participation of all that could salvage the world of calamities.

“Some of our farmers for example need to know much about climate change in order to re-adjust to maximise production and we need all hands on deck to achieve this,” President Mahama said.

He said religious leaders and faith-based organisations had, over the years, contributed immensely towards the peace and stability of the country and it was only fair and appropriate to frequently interact with them to share common challenges for workable solutions.

He said the major challenge of the world now was terrorism and the religious leaders had a vital role of educating the youth against using weapons of destruction to achieve selfish and wicked interests.

President Mahama explained that because no government succeeded in isolation, the Government had decided to engage the religious leaders in all development issues owing to their huge audience throughout the country.

While playing their mandated role of building society religiously, the President urged them to embellish the socio-economic challenges of society in their educational programmes.

On the economy, President Mahama predicted stability in the coming days adding that whoever becomes President next year would enjoy the fruit of the labour the Government is currently putting in place.

He said apart from the austerity measures government had put in place in the past few years, the engagement with the International Monetary Fund had also yielded dividends in re-shaping the economy.

“We will ensure that the economy is stabilised whether I am handing over to myself or to another person,” he said.

President Mahama said government would continue to play its roles meaningfully towards the stability of the economy and urged all citizens to respect the laws of the land by carrying out their responsibilities.

The programme was attended by heads of various religious bodies, ministers of state and other locally-based development partners.

China has made important contributions to promoting world peace, development

Zoomlion appealed to customers to pay their sanitary revenue

Implement the National Gender Policy to the fullest – Ministry urged