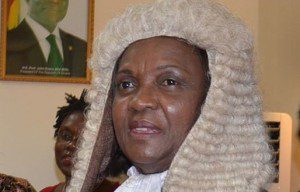 Chief Justice Georgina Wood has concluded that there is a prima facie case against the Commissioner of the Commission on Human Rights and Administrative Justice, Lauretta Lamptey in the hotel accommodation saga, according to a statement issued by petitioner Richard Nyamah.

?I am delighted in a measure, I suppose the entire nation would, to learn that Her Ladyship the Chief Justice, Mrs. Georgina Theodora Wood, has made a prima facie case on my petition for the removal of the Commissioner of the CHRAJ from office,? the statement signed by Nyamah said.

It said: ?Yesterday, my Counsel Samson Lardy ANYENINI?s chambers received official communication from the august office of the Chief Justice to this effect.?

Lamptey spent over $200, 000 to pay rent at the plush AU Village in Accra while her official residence was being renovated at a cost of Ghc180,000.

Since August this year, after her AU rent ran out, Lamptey put up at a hotel at the cost of $450 a day.

Nsawam Adoagyir MP Frank Annor Dompreh and Nyamah filed separated petitions to the presidency for a probe into Lamptey?s conduct for her removal.

Below is the rest of Nyamah?s statement:

A 24-page report containing the decision notes the petition grounded on ?? acts of serious misconduct, inappropriate exercise of office, serious misjudgement, breaches of laws and public trust? together with its accompanying exhibits as well as a response provided by Ms. Lauretta Vivian Lamptey have been carefully examined by the Chief Justice acting in her administrative capacity as she is constitutionally mandated.

It concludes that: ?? A prima facie case has been made to justify full investigations into the complaints?.?

While duly recognising that this finding is not conclusive of guilt, it is gratifying to cross this critical hurdle in the impeachment process.

It is also reassuring that the accompanying letter signed by Judicial Secretary, Justice Alex B. Poku-Acheampong on the directions of the Chief Justice, says ?(t)he Hon. Lady Chief Justice in compliance with Article 146(4) of the 1992 Constitution is therefore in the process of setting up a committee to investigate the compliant.?

H.E President John Mahama is humbly reminded the coast is now clear and urged to act on the earlier appeal to him to consider exercising his Article 146 (10) (b) constitutional powers to suspend Ms. Lamptey pending investigations.

This has become even more important over news that she has not only lost the requisite moral standing to preside over matters of human rights abuse and administrative injustices but has also brought CHRAJ?s reputation into serious question internationally.