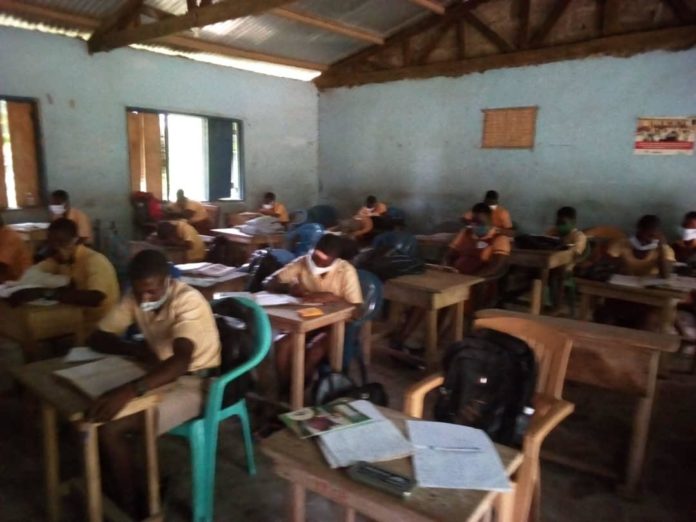 Junior High School (JHS) admission forms in the Zabzugu District of the Northern Region are gradually becoming scarce with primary six pupils scrabbling for the forms to have access to JHS education.

A report by the Africa Education Watch said the development was depriving poor pupils of education at that level, especially those who could not afford the GHC5.00 form.

The district had only 17 JHSs admitting primary pupils from 55 schools.

It said about 70 per cent of public primary schools in the district had no JHS compelling pupils to walk long distances to communities to access that level of education, with some dropping out.

Transitioning from primary school to JHS remained a major national issue with only 79 per cent making it to JHS one in deprived communities, it said.

A similar finding in the Oti Region showed that 33 per cent of primary schools in the Nkwanta South District do not have JHS, with only 62 serving 92 primary schools.

The Organisation said 17 schools were purposively sampled; seven in the Nkwanta South District and 10 in the Zabzugu District.

Schools in those communities lacked textbooks and out of the 17 schools visited in the two districts, only six indicated they had some English and Mathematics textbooks in the old curriculum.

During the launch of the report, Justice Agyei-Quartey, the Lead Researcher, told the Ghana News Agency that poor teacher deployment, lack of teaching and learning materials, lack of infrastructure as well as less contact hours, were pervasive in deprived communities.

He said the setbacks had negatively impacted learning outcomes over the years.

The report established a correlation between the level of deprivation and learning outcomes with the analysis of Basic Education Certificate Examination results for 2019.

The Nkwanta South District recorded 17.19 per cent of the more than 1,760 candidates who wrote in 2019 as e year as against the national average of 66.5 per cent.

Though the national pupil trained teacher ratio 28:1, the report showed 53:1 in the Zabzugu District with the Nkwanta South District having 35:1.

Other key observations were infrastructural deficits in the Zabzugu District, causing the schools to adopt multi-grade systems of teaching where two classes were merged in one room with one teacher, it said.

The situation, per the report, was affecting contact hours of quality delivery.

Kofi Asare, the Executive Director of Africa Education Watch, said it was important for the state not to shirk its responsibility of providing free, quality and universal basic education for all.

Mr Joseph Kwame Kumah, Member of Parliament of Kintampo North, shared similar experiences of schools in his constituency but said through collaborations, he had added some school infrastructure.

He said Parliament’s Select Committee on Education was engaging government to get the GETFund to build more schools.

Mr Kumah recommended that 50 per cent budgetary allocation for education be invested in basic education.

I will respect term limit of my presidency – Akufo-Addo