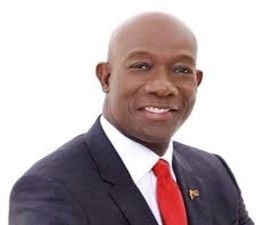 Dr. Keith Rowley, the Prime Minister of Trinidad and Tobago, has arrived in Ghana for the commemoration of the country’s 63rd independence anniversary celebration.

The Prime Minister, who has been invited as the Special Guest for the historic occasion, touched down on Wednesday, March 04.

Mr. Laud Commey, Chairman in-charge of the Anniversary Planning Committee, in a media briefing in Kumasi, hinted that the Prime Minister would be hosted at a dinner by the Asantehene, Otumfuo Osei Tutu II, at the Manhyia Palace, Kumasi.

He would also take advantage to interact with stakeholders, while creating the platform for strengthened bi-lateral relationship with Ghana.

Kumasi, touted as the ‘Garden City of West Africa’, hosts the event for the first time at the 42,000-capacity Baba Yara Sports Stadium under the theme, “Consolidating our Gains”.

Ghana was the first country in sub-Saharan Africa to have gained independence from colonial rule in 1957, setting the tone for other countries to follow suit after many years of struggle for self-rule.