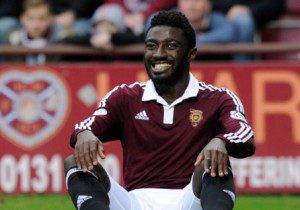 Ghana midfielder Prince Buaben believes a top-four finish for Hearts will be huge a accomplishment.

The 27-year-old says a top-four finish will be viewed as massive success for the newly-promoted side.

“There is still a long way to go and hopefully we can achieve better. We’re still in the cup so that gives us a chance to win a trophy,”he said

“We are third in the league and, you never know, we just have to keep pushing. If we come second, third or fourth, it’s a great achievement. Coming from the Championship, it’s like winning a trophy. We’re out to do our best for the next couple of months and hopefully get higher up the table.”

He added: “When you come from the Championship up to a bigger level, you always try to survive. That’s the first thing,” he continued. “When things are going well, then you start to think about other stuff. The manager has set a target but that’s between us, the players and the staff.

“People should understand that we’re third in the league and that’s a great achievement so far. Everyone has their own opinion but right now we are doing really well.

Hearts travel to the Tulloch Caledonian Stadium to play as guest of Inverness CT.

Ghana is currently far back in African football – Kwabena Yeboah

War College to be established in Ghana soon – Prez.