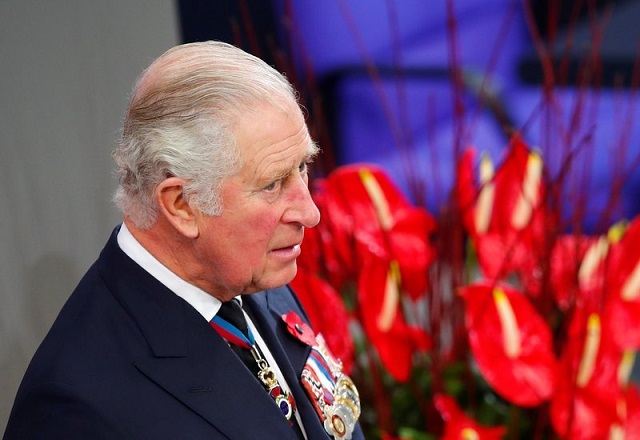 Britain’s Prince Charles laid a poppy wreath at Berlin’s Neue Wache memorial for the victims of war and dictatorship on Sunday before addressing parliament in both German and English about the close bond shared by the two countries.

Along with the wreath, Queen Elizabeth II’s eldest son and heir to the throne left a card with a handwritten message that read: “In everlasting remembrance of all victims of conflict and tyranny. Charles.”

German President Frank-Walter Steinmeier and his wife, Elke Buedenbender, were also in attendance at the ceremony, along with German Defence Minister Annegret Kramp-Karrenbauer, among other dignitaries.

Neue Wache has been Germany’s central memorial for the victims of war and tyranny since 1993. The focus of the monument is the sculpture “Mother With Her Dead Son” by Kaethe Kollwitz, whose own son died in World War I.

Sunday’s ceremony took place on Remembrance Day, when Germany commemorates the victims of the Nazi regime and the two world wars. This year’s Remembrance Day is also dedicated to German-British friendship.

Brexit is never far from the agenda and the Prince of Wales’ visit to the European Union’s powerhouse economy comes as Britain and Brussels struggle to hammer out a trade deal before an end-of-year deadline.

Charles’ speech to parliament touched on the subject of Britain’s departure from the European Union, telling his audience that the two nations’ destinies will always remain inextricably “intertwined.”

Seventy-five years after the end of World War II, the former rivals “are instinctive problem solvers, working together to find innovative and practical solutions to the challenges we face around the world,” he said.

“It is, therefore, my heartfelt belief that the fundamental bond between us will remain strong: we will always be friends, partners and allies.”

Charles, who turned 72 on Saturday, was accompanied by his wife Camilla, the Duchess of Cornwall. Prior to the ceremony at Neue Wache the German president hosted the royal couple at Berlin’s 18th-century Bellevue Palace for a conversation.

It is Charles and Camilla’s first joint official overseas visit since the start of the pandemic. Both wore face masks at the ceremony.

Charles was infected with Covid-19 earlier this year, at the start of the pandemic, but is said to have only displayed cold-like symptoms.

Charles and Camilla previously visited Germany in May 2019. Since 1962, Charles has been to Germany more than 30 times, both officially and privately.