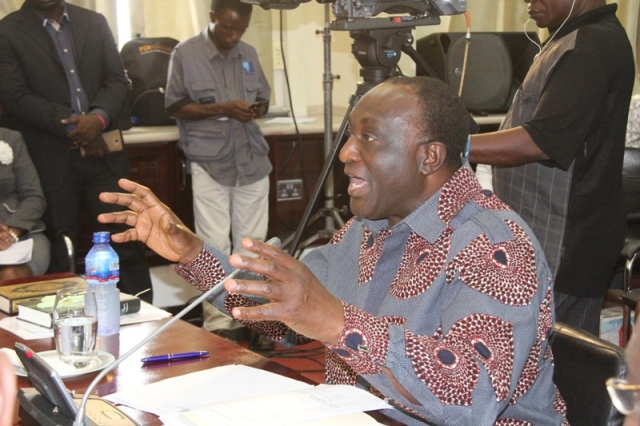 Mr Alan John Kwadwo Kyerematen, Trade and Industry Minister Designate on Monday asked the private sector to brace itself up to have a massive role in the industrial transformation programme of the Akufo Addo Government. He indicated that the Government would make the private sector its focus to lead the national industrial transformation agenda.

“The important thing is for our private sector to appreciate and recognize that the government is committed to making sure that the private sector survives and leads the process of transformation and that is why we are starting with existing companies,” Mr Kyerematen said.

Mr Kyeramaten made the call when he appeared before the Appointments Committee of Parliament for vetting at the Parliament, in Accra.

Mr Kyerematen, 61, a lawyer, management and development consultant, diplomat and politician, who at one time held the same portfolio in the former Kufuor Administration, and was the first Minister to be named by President Nana Akufo-Addo after his electoral victory gave the assurance that the Government’s is committed to implement the “one-district, one factory” manifesto pledged of the New Patriotic Party (NPP).

According to the Minister Designate, the Government will make some financial allocation for the factories and also collaborate with the private sector to deliver them.

He identified the provision of capital as paramount to realizing the “one district, one factory” pledge, and explained that making capital available to small and medium enterprises will reduce the difficulties they face in raising credit through commercial banks.

“We all recognize that it is not as if the banks in this country do not provide credit and financing, but we know it is the tenure of the credit they provide which is a challenge for our companies.”

According to Mr Kyermaten, the Government is to carry out a diagnostic study of companies in the private sector to determine potentially viable ones and the specific support they need and how to improve their competitiveness.

“We would undertake a diagnostic study, let’s say for instance we have a hundred companies that are potentially viable but are currently distressed. As we are sitting now will not be able to determine the specific support that they need to improve their competitiveness so the starting point is for us to conduct an audit of these companies and identify exactly what they require to become competitive and then we will provide a comprehensive package of support in order to improve their competitiveness.”

He announced that the Government would commit part of the $ 1 million development fund for each constituency to the construction of the factories in the districts.

“There is an agreement in principle for government to allocate certain percentage of the one million dollars that is intended now to go to every constituency, a percentage of that to support particular district,” he said.

However, despite wide consultations by the Government on the proposed project, the time to commence the construction of the factories varies; which according to the nominee depends on the interest and commitment of the private sector.

The Minister Designate, who spotted a “Friday wear” of an African print to the vetting, reiterated the Government’s commitment to energise the private sector and suggested also that capital could be sourced from the Consolidated Fund and the capital markets.

He said $US24m has been approved by parliament to be used as funding for the establishment of a sugarcane plantation to feed the Komenda Sugar Factory in the Central Region.

“My understanding is that the defect that has been occasioned by not having a plantation developed to precede the establishment of the factory is being cured by, I think, a loan approved by parliament, $24m dollars, to establish a plantation for the factory,” he added.

The factory, re-constructed through an Indian Exim Bank loan, has the capacity to crush 1,250 tonnes of sugarcane per day

The Trade and Industry Minister Designate attributed the failure of the Presidential Special Initiatives (PSIs) introduced by the Kufuor administration in 2005 to “negative propaganda,” saying but for partisanship, the PSIs would have been the most successful industrial intervention.

“The presidential special initiatives were one of the major interventions that the government introduced during our term of office. There were four initiatives – that producing industrial starch from cassava; palm oil industry; then supporting garment and textiles production; and also industrial salt,” he said.

He added: “As far as my understanding goes, beyond the efforts that our first president made in industrialisation development by establishing state enterprises, probably the president special initiative is one of the most successful industrial interventions that have been introduced in this country and I say this for one reason because the evidence now shows clearly that those were moves in the right direction.”

Mr Kyerematen, holding the same portfolio at the time, oversaw the initiative, which was meant to make other crops such as cassava and oil palm add to the nation’s traditional cash crops.