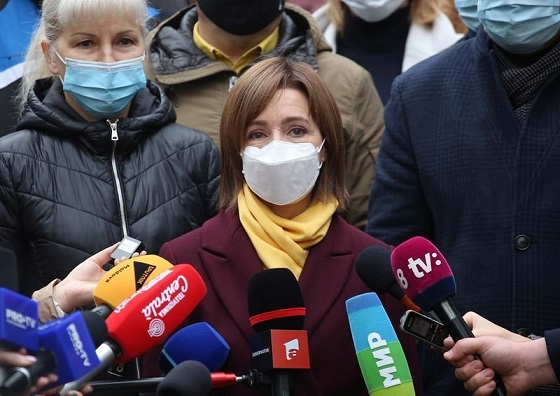 Pro-Russia President Igor Dodon had secured 43 per cent of votes after 99 per cent of them had been counted, according to the initial results.

A former Soviet republic in Eastern Europe between Ukraine and EU state Romania, Moldova has long been divided between aspirations to more closely integrate with the European Union and loyalties to its former ruler, Moscow.

Dodon, 45, previously beat Sandu in a run-off election in 2016 but came out slightly behind Sandu in the first round of the 2020 vote earlier this month.

As president, Dodon has looked to Russia for support while Moldova, one of the poorest countries in Europe, has teetered near economic collapse in recent years.

Sandu, 48, served as prime minister for several months during Dodon’s first term before being ousted in a vote of no-confidence.

She has presented further integration with the EU as way out of the economic crisis.
Sandu received 36.1 per cent of votes in the election’s first round on November 1, whereas Dodon received 32.6 per cent, according to the electoral authority.

The Organization for Security and Cooperation in Europe (OSCE), which has independently observed the electoral process, expressed overall approval for the first round.

The campaigning was competitive, “fundamental freedoms were respected,” and the electoral authorities “organized technical aspects of the election professionally,” it said in an assessment.

UN Must Engage With Taliban – Guterres