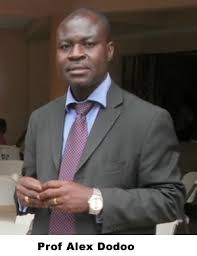 The Director General of the Ghana Standards Authority (GSA), Professor Alex Dodoo, has been sworn into office as the 15th president of the African Organisation for Standardisation (ARSO).

He was sworn into office on June 30 at the 28th General Assembly of the continental standards body in Yaounde, Cameroun.

Prof. Dodoo takes over from Mr Charles Booto a Ngon, the head of the Cameroun national standards body for the term 2022-2025.

He has become the second Ghanaian to lead the prestigious continental association, following in the footsteps of Dr Emmanuel K. Marfo, who was ARSO president from 1992-1994.

Prof. Dodoo won the bid to lead the organisation after an election at the 26th ARSO Hybrid General Assembly in Kigali, Rwanda in June last year.

“I am delighted and privileged to be given the opportunity to serve as ARSO President. I will give it my all and rely on your support to prosecute our mandate of using standards to transform our countries and our continent,” Prof Dodoo said.

In his acceptance speech, he said the agenda for his presidency was to leverage the image and position of ARSO to change the narrative by expanding intra-African trade within the purview of the African Continental Free Trade Area (AfCFTA) agreement, with a focus on improving trade in Made-in Africa goods locally, regionally and globally.

He explained that ARSO traces its genesis to the unfolding events and the prevailing mood of the African socio-political and economic Pan-Africanism of the 1970s and the culmination of which was at a conference held at the historic and Accra.

“The African governments under the auspices of the United Nations Economic Commission for Africa (ENECA) and the OAU convened the Founding Conference of ARSO in Accra, Ghana from 10th – 17th January 1977 to consider the first Constitution of ARSO and to witness the formation of the Organisation to speed-up the African Economic Integration,” he said.

He said the time was therefore ripe to take ARSO to the next level and position it as a pivotal body for the economic transformation of Africa as Ghana leads the organisation.

“This is especially so since the AfCFTA Secretariat is based in Accra, so there is opportunity to use proximity to the secretariat to further the aims of ARSO now that the AfCFTA is in its early stages,” he stated.

Prof. Dodoo said every action and activity under his leadership would be in line with four broad strategies, including the sustainability of ARSO, its financial stability, development and expansion.

They would also include boosting intra-African trade through industrialisation, use of standards, mutual recognition arrangements and any other means that would allow Africans to trade with one another within the continent, he added.

Equally, he said, his focus would be on deepening regional self-sufficiency by supporting governments to invest in and maintain a solid sustainable quality infrastructure for standards, measurement and testing, all based on a ‘Regional Quality Infrastructure Policy’

“We have to make, and not just take, standards, preferably at the International Standards Organisation (ISO) level since international standards are the most to be desired for all sorts of reasons. ARSO Standards should become ISO standards due to our participation in standards development at the highest levels,” he said.

He said there was also the need to develop standards for the high growth areas such as the construction industry.

“Africa has less than 30 per cent of the buildings and infrastructure that it will need by 2050. So we have to look at how we address this and create jobs and wealth by developing new standards for cement and cementitious materials and how we can use local materials like cassava husks etc. to create additives for cement thereby reducing dependence on clinker,” he said.

Another Poor Rating For Ghana As Fitch Downgrades Credit Ratings