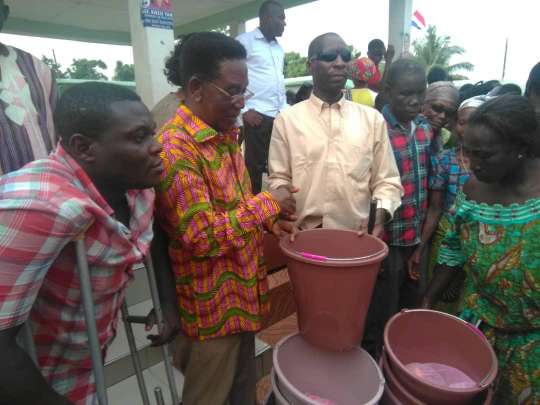 Professor Kwesi Yankah, Minister of State In charge of Tertiary Education has organised a get-together for over 400 People with Disability(PWDs) in the Agona East District to put smiles on their faces.

The PWDs were received to the private resident of the Prof Yankah at Duakwa, where plastic buckets and food items were presented to them.

The Minister, who is the Parliamentary Candidate for Agona East Constituency branch of the New Patriotic Party (NPP) also presented five wheel Chairs to leaders of the PWDs in the district to be distributed to members, whose wheelchairs were faulty for them to be comfortable.

Prof Yankah bemoaned the devastating effect of the Polio disease on many people who had grown to become disabled persons in the society and reiterated calls on parents not to hide behind religion to deny their children medical treatment, especially immunization.

The Minister said the government was committed to ensuring that more opportunities were created for them to become responsible citizens.

Prof Yankah called on the chiefs, stakeholders, opinion leaders and other health professionals to intensify their education to help reverse the effects of preventable childhood diseases in the society, assuring that the get-together would not be a nine-day wonder, but permanent.

He called on the leadership of the Ghana Federation of Disabled Persons in the Agona East to endeavour to register all PWDs who were non- members in order to enjoy the disability fund.

Mr Robert Baah, Agona West Director of Department of Social Welfare asked PWDs to invest their share of the Fund profitably and cautioned them to desist from begging for alms on the streets since it was an offence.

Mr Baah who was the former Agona East director, assured the PWDs that government had put in place effective measures that would enhance their welfare.