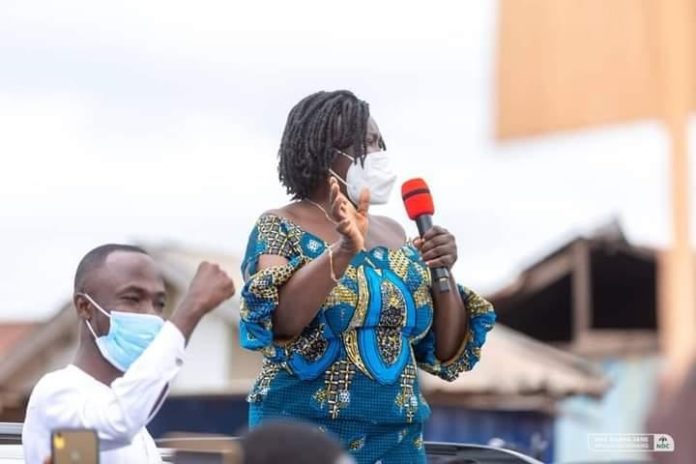 Professor Naana Jane Opoku-Agyemang, the running-mate to the National Democratic Congress (NDC) flagbearer, has reiterated the need to ensure peace in the forthcoming December polls.

She said a peaceful environment was the only sure way the country could achieve immense success in terms of development.

Prof Opoku-Agyemang said this when she paid a courtesy call on the Paramount Chief of Sefwi-Bekwai Traditional Area, Oyeadieyie Kwadwo Armah Basape III, as part of her three-day campaign tour of the Western North Region.

“Healthy competition is essential to democracy and that must not lead to bloodshed,” she said.

While asking the traditional rulers to pray for guidance and blessings, Prof Opoku-Agyemang called on the elderly in society to set good examples for the youth to emulate as they are the backbone of the nation’s future.

She advised the people of Sefwi-Bekwai to eschew politics of insults and vote massively for the NDC in the December polls to enhance their livelihoods and the country’s economy.

The vision of NDC was to create jobs for the youth, she said, and urged them to support the Party to realise its vision.

“We are a congress hence we include all, no discrimination what so ever,” she said.

Oyeadieye Basepe II, thanked the NDC’s running-mate for recognising traditional authorities as partners in development and assured her of their prayers and support.

He appealed to her to help Sefwi-Bekwai get a separate district from the Bibiani Municipality when the Party was voted into power so as to enhance development of the area.