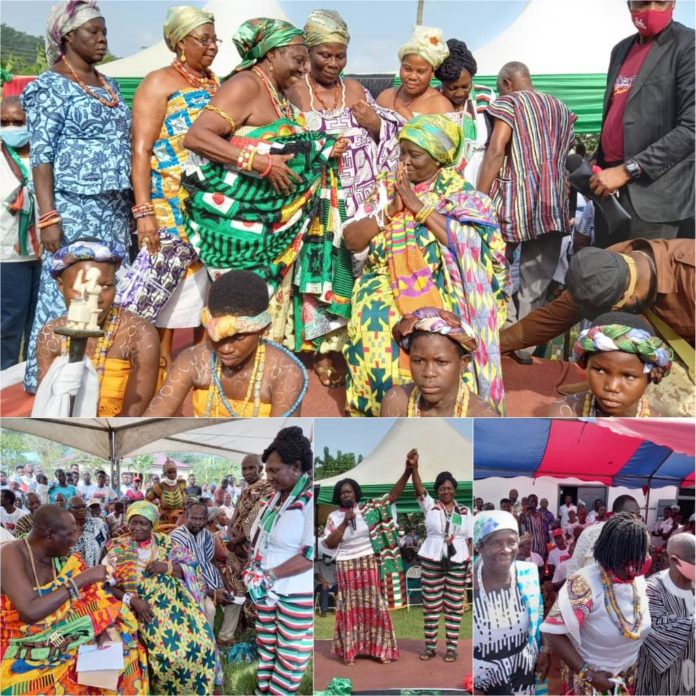 Professor Jane Naana Opoku-Agyemang, Running Mate of the National Democratic Congress (NDC), has been enstooled “Ngoryifia II” to wit, Development Queen of the Alavanyo Traditional Area in the Hohoe Constituency.

The title conferred on the Running Mate was to honour her for development projects championed by the Party in the area and also as a daughter of the land.

Professor Opoku-Agyeman, who visited Alavanyo Wudidi, her maternal home as part of her tour to the Volta Region, said the warm reception given her was emotional adding that she had come home for prayers and advice from her family.

“We are praying for the return of Mr John Dramani Mahama because of what he has done and focuses on including; especially training and equipping the youth to ensure that they are not jobless. That is why we are saddened that all the projects he has started have all stopped.”

Mr Johnson Fiakpui, Family Head of the Fiakpui family in Alavanyo, congratulated the Professor for making her people proud and asked for God and ancestral blessings for her in her bid to help the Party win the upcoming elections.

Professor Opoku-Agyemang who later addressed a durbar of Chiefs and people of the Area at Alavanyo Kpeme, said the NDC government was interested in the health of citizens which resulted in the introduction of the free primary healthcare.

She noted that the Party had also supported education, infrastructural development, provision of water, roads, health facilities and all the things that were unavailable in the country to ensure their health status was of utmost importance.

“We need to change the phase of our politics. We need to redirect our politics to putting measures in place and executing them to the benefit of everyone including; the youth, middle-aged, women, adults and even yet-to-be-born.
“All the things we need to do involves hard work, focus and has no place for insults, language that is not pleasing, arrogance, putting fear in people nor disrespect but a place for linking ideas.”

Prof Opoku-Agyeman noted that the selection of Professor Margaret Kweku, Parliamentary Candidate for the Constituency since it would add value to health issues, when the Party returned to power and asked the electorate to vote for her.

She urged the members of the Party to discard any idea of voting “skirt and blouse” in the Constituency to enable the Candidate work hand-in-hand with the elected flagbearer of the Party.

Professor Margaret Kweku, Parliamentary Candidate for the Hohoe Constituency, said there were a lot of developmental projects the Constituency enjoyed if elected to represent them in Parliament.

She said her works as a Municipal Chief Executive had spoken enough to let people know that she would bring more developments to the area some of which included; an organic fertilizer factory and military centre in Alavanyo and reconstruct the bridge over Dayi River.

Prof Kweku called on Party faithful to be wary of campaign messages that did not speak well and not to be swayed but rather remain focused.

Mr Henry Ametefe, Volta Regional Chairman of the NDC, asked the people to vote for the Party in the elections since it was the Party that believed in government of inclusiveness not exclusiveness.

Togbega Tsedze Atakora VII, Paramount Chief of Alavanyo Traditional Area, said the Area was proud to have its citizens that would possibly become a president of the country one day.

He said the area was grateful for development projects including; tarring of Gbi-Wegbe to Kpando road.
The Running Mate was accompanied by National, Regional, Constituency and Branch executives of the Party.