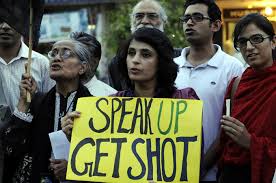 Two men riding on a motorbike fired at the car of Muhammad Shakil Auj, head of Islamic Studies at Karachi University.

Police officer Pir Muhammad Shah said that one bullet hit the victim in the head, killing him on the spot.

Shah said the professor was accused of blasphemy after some local clerics issued a religious edict against him for his liberal views.

Another police official Sher Jehan told dpa said that the professor had also problems with some other teachers of the university.

“We are investigating from different angles and it is too early to determine the real cause of the attack,” he said.

In May a prominent human rights lawyer was gunned down in tje central city of Multan. He was fighting for the release of a university lecturer who was arrested by police after accusations of blasphemy.

Auj had written at least 15 book and several research articles. The university has been closed for three days to mourn his death.