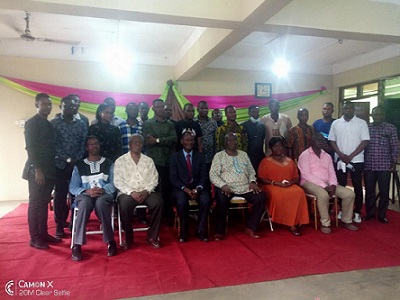 This, he said would go a long way to promote peace among Christians in Ghana.

AICs, also known as “Spiritual Churches” are Christian denominations founded and led by Africans for the purpose of proclaiming the Gospel of Jesus Christ and worshipping the Triune God in the context and worldview of Africa and Africans.

Ghana is noted to have recorded the emergence of the first AIC in Africa south of the Sahara in 1862.

Rev Prof Oduro said the emergence of AICs on the religious terrain of Africa had since the 20th century cause a mammoth growth of Christianity not only in Africa but in other continents.

He made the assertion in his presentation at the launch of the 50th Anniversary Celebration of the GNTS in Accra.

The arrival of Edwin and Irene Weaver, a Mennonite Missionary couple in Ghana, led to the establishment of the GNTS in Accra in 1971, to train Ghanaian leaders and members of independent churches in Biblical and ministerial matters.

Rev Prof Oduro said the massive influence of independent churches, however, caused them to endure many persecutions and stagnation from Christians – particularly, by most leaders and members of denominations established by Western missions.

He gave a brief history of an unhealthy relationship between the AICs and the Western-Mission Christian denominations in Ghana from 1950 to 2017, reiterating the role of theological seminary in healing the muddled arena of religious antagonism, suspicion and marginalization.

He said according to research, with an average attendance of 40 to 50, the total number of places of worship of AICs in Accra might reach 50,000, which was probably more than or as much as that of the established Churches combined.

He said AICs drew increasing number of members of Western-Mission founded Churches, among them educated and young people; stating that as a result, many leaders and members of the mission churches accused the AICs as “sheep stealers”, that is churches who take delight in proselytising members of other churches rather than reaching out to the unreached.

“The Mission Churches, therefore, adopted many strategies to discourage their members from becoming members of or patronizing the activities of the independent churches. Prominent among the strategies were that of sarcasms and insults,” he stated.

He said some mission churches leaders insulted AIC pastors indiscriminately and openly by calling them “religious crooks” and “swindlers” who were only out to cheat not only the individuals but the Government and the nation.

Rev Prof Oduro cited that when the National Liberation Council (NLC), a military Government, invited C. K. Wovenu, leader of the Apostle Revelation Society (ARS), an AIC, to preach during the rededication of the Christianborg Castle, which was then the seat of Government in 1966, the Christian Council of Ghana protested vehemently because “…the Christian Council did not consider Wovenu a true representative of the Church”.

He said when the Pentecostal/Charismatic churches began emphasizing the ministry of delivering people from demonic entanglements, those who attended a spiritual church were perceived by the mission denominations as candidates of deliverance from demons.

Rev Prof Oduro said the AICs, on the other hand, reacted by calling the mission denominations “churches without the Spirit of God”.

He said the testimonies of some mission church members who defected to join the independent churches stressed the perception that “the former were places where the Spirit of God was fast asleep”.

He said the wound-healing ministry embarked upon by GNTS bringing peace between the AICs and the Western Mission-founded Churches had been very phenomenal.