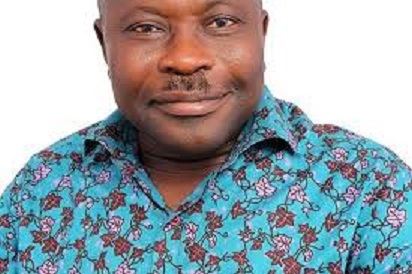 Mr Moses Anim is a Ghanaian Politician and Member of Parliament (MP) for Trobu Constituency in the Greater Accra Region on the ticket of the New Patriotic Party (NPP).

He hails from Adukrom (his father’s hometown) in the Eastern Region and was born on April 25, 1965 (55 years) at Korle-Bu in Accra. His mum is from the Oti Region.

He spent a brief part of his life in his mum’s hometown and lived mostly in Accra, precisely at Abensu (Agric Quarters) where his father worked as an Agricultural Extension Officer.

Mr Anim is married and has a daughter (first born and a Nurse) and two sons.

He attends the Church of Pentecost (Abensu Assembly) and is a Presiding Elder, a position he has held for twelve years.

Due to his ability to fluently speak Ewe, Ga, Guan, Akuapem and Akan dialects, he is able to penetrate many ethnic boundaries and easily interact with people from various walks of life.

He started his elementary school at Nii Otto Kwame Basic School at Pokuase and proceeded to the Nkawkaw Secondary School (KAWSEC) and Swedru Secondary School where he had his Ordinary Levels and Advanced Levels Education, respectively.

In 1991, Mr Anim obtained his first degree in BSc Biochemistry at the University of Ghana (UG), Legon and in 2005, obtained an Executive MBA in Project Management at the UG Business School. He was an affiliate of the Commonwealth Hall (Vandals).

According to him, he developed the love for politics during his days in the University when Nana Addo Dankwa Akuffo-Addo, current President of the Republic of Ghana, used to visit the Commonwealth Hall, at a time when active politics was restricted on campuses, to rally them for meetings at obscure places.

He said the zeal with which Nana Addo carried out his political activities encouraged him to join active politics and became part of the team in 1992 that propagated the Danquah Busia Tradition.

Alongside his participation in politics, he worked as an Assistant Production Manager (1993-1999) and Quality Assurance Manager (1999-2011) for ASTEK F.P. Limited. Between 2004 and 2012, Mr Anim was the Project Manager of WILHELM Limited.

His mentor and role model was Dr Kwame Safo-Adu, Minister of State in the Second Republic and a founding member of the NPP.

Dr Safo-Adu, together with Major Courage Emmanuel Kobla Quashigah, Minister of State for Agriculture and later Health in the NPP Government of J.A Kufuor between 2001 and 2009 took Mr Anim and others through rigorous training at Ada after which he became a Polling Agent for the Party in the 1992 General Elections.

He served as the Financial Secretary for the then Trobu-Amasaman Constituency from the year 2000 and later became the Campaign Manager for
Mr Samuel Nii-Aryeetey Attoh, Member of Parliament the Constituency from January 7, 2005 to January 6, 2009.

By popular request from NPP members, Mr Anim contested Mr Attoh in the NPP Primaries held in 2007 which he won but lost to Mr Ernest Attuquaye Armah, of the National Democratic Congress. In 2011, he once again won the NPP Primaries and proceeded to win the 2012 Parliamentary Elections.