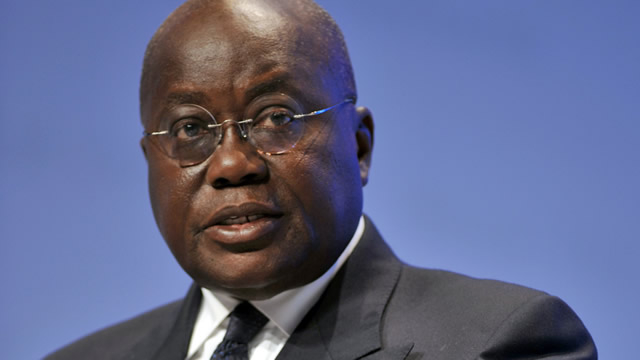 President Nana Addo Dankwa Akufo-Addo Tuesday formally filed his nomination at the Electoral Commission (EC) to seek another four-year mandate in the December 7, 2020 presidential elections as the candidate of the ruling New Patriotic Party (NPP).

The President, who turned 76 in March, was acclaimed the NPP’s flagbearer last June when he emerged the only personality to file for the slot when the party closed its nominations for aspirants. The Ghana News Agency hereby submits a profile of candidate Akufo-Addo

President Akufo-Addo was born on March 29, 1944 in Ga Mashie in Accra to a Ghanaian politician, laywer and independence fighter Edward Akufo-Addo and his Adeline, a royal of Akyem Abuakwa.

He started his basic education at the Government Boys School, Adabraka and at the Rowe Road School at Kinbu, both in Accra. He continued to the United Kingdom for his secondary education, where he studied for his Ordinary Level and Advanced level examinations at the Lancing College in Sussex from 1957 to 1961.

Mr Akufo-Addo returned to Ghana in 1962 where he took a teaching appointment at the Accra Academy Secondary School, before going to the University of Ghana in 1964 to read economics. He graduated in 1967 with Bachelor’s Degree in Economic.

Mr Akufo-Addo returned to the United Kingdom to study law and was called to the English Bar (Middle Temple) in 1971 and to the Ghana Bar in 1975. He worked in France with a US law firm, Coudert Brothers and with the U.V Campbell Chambers in Accra until he founded his own law firm, Akufo-Addo, Prempeh and Co. in 1979.

Mr Akufo-Addo’s roots in political activism follow a family tradition of prominence in politics and civil service- His father served as the ceremonial president of Ghana from 1970 to 1972, his great-uncle J.B. Danquah was a nationalist and his uncle William Ofori Atta was one of the founding fathers of Ghana. He began a journey of active politics in the 1970’s when he served as general secretary of the People’s Movement for Freedom and Justice (PMFJ) that opposed the plans of the military government in place at the time.

Known for spearheading the fight for human rights, the rule of law, justice, the independence of the Judiciary and media freedoms, and democracy, he joined the NPP in 1992, serving as the member of parliament for the Abuakwa South Constituency in the Eastern region for three consecutive terms from 1996 to 2007.

Mr Akufo-Addo was in 2001 appointed Attorney-General and Minister of Justice under the tenure of President John Agyekum Kufuor, where he spearheaded the repeal of the Criminal Libel Law which criminalized free speech, and also initiated other reforms in the legal processes ogf the country including the automation of the courts.

In 2003, he was reassigned as Ghana’s Foreign Affairs minister, where he was instrumental in brokering peace in Sierra Leone, Liberia, Ivory Coast, and Guinea Bissau, as the Chairman of the ECOWAS Mediation and Security Council.

Under his stewardship, Ghana was elected a pioneer of the 15-member African Union Peace and Security Council in 2004. That mandate was renewed in 2006 at the AU’s Summit in Khartoum, Sudan. He chaired the AU’s Ministerial Committee that fashioned the Ezulwini Consensus, which defined the Union’s common position on United Nation Reforms, and negotiated the hosting of the AU’s Summit in Accra in 2007.

Also, during his time as foreign minister, Ghana was elected a non-permanent member on the UN Security Council from 2006 to 2007, during which period Mr Akufo-Addo chaired the meeting of the Security Council which took the decision that halted Israel’s massive incursions into Lebanon.

He was instrumental in getting Ghana elected as a member of the UN’s Human Rights Council and its Peacebuilding Commission.

Mr Akufo-Addo resigned his position in 2007 to contest the NPP’s presidential primaries with 16 other candidates for the 2008 presidential election, a contest he won.

In the December 7, 2008, he won the first round of the country’s presidential election, with 49 percent of the votes cast, but eventually lost the second round of voting to his challenger the late Prof. Evans Atta Mills of the National Democratic Congress (NDC) who beat him narrowly in the polls.

He again secured the mandate of the NPP to lead the party into the 2012 Presidential elections in which he challenged Mr John Mahama of the NDC and six other contestants. He also lost that contest narrowly to the NDC’s candidate, but contested the results of the polls at the Supreme Court which upheld Mr Mahama’s victory after a prolonged legal battle. He accepted the verdict and urged his supporters to respect the Courts’ decision.

In 2016, Mr Akufo-Addo again got the nod of the NPP to contest the presidential elections as the party’s flagbearer, facing six other candidates including the incumbent John Mahama. He won the December 7 contest with the largest margin of victory for a presidential candidate since 1996.

He was sworn in as president of the Republic on January 7, 2017 at a largely attended ceremony at the Black Star Square where he pledged to deepen the country’s democracy and move it to a higher level of development.

President Akufo-Addo’s tenure in government has been characterized by a massive industrialization drive, and forging bilateral relations with countries based on trade and investment.

His government has built a foreign policy that shifts from grants to partnerships and self-reliance to move the country to a state beyond Aid.

He government has instituted several policies and programmes, that have been geared towards making Ghana’s economy resilient, and creating the enabling environment for the private sector to thrive and for foreign direct investments.

Flagship programmes such as the One District, One Factory, the One Village, One Dam, Youth in Agriculture, and Entrepreneurship, have given the country the needed impetus for harnessing local resources and talents for accelerated development

President Akufo-Addo also rolled out a programme to provide free senior secondary education and Technical and Vocational education as a major policy decision to propel the country’s development,

The President in April 2017 was appointed as the Co-Chair of the UN Secretary-Generals Sustainable Development Goals Advocate; he was also named the AU’s Gender champion on July 3, 2017.

He was also elected by the 57th Ordinary Session of the Authority of Heads of State and Government of the Economic Community of West African States (ECOWAS) as the new Chairman of the Authority in Niamey, Niger in September.