With five days to the start of the 31st edition of the Total Africa Cup of Nations (AFCON) scheduled to commence on January 14-Feb. 5, 2017, in Gabon, Coach Avram Grant has introduced seven players who will be making their maiden appearance at the biennial tourney. 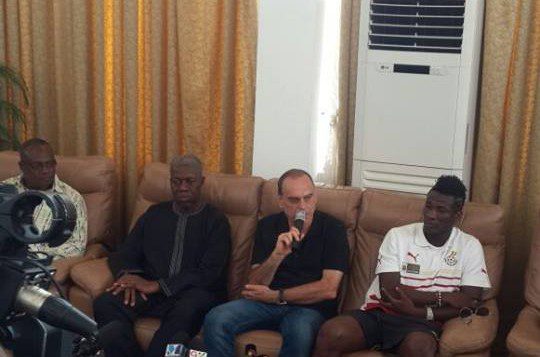 The Black Stars currently training in Al Ain will be led at the tournament by Captain Asamoah Gyan with support from Andre Ayew, Jonathan Mensah, Emmanuel Agyemang-Badu and Mubarak Wakaso to provide the needed experience for the tournament in Gabon.

Ghana lose 8-9 on penalties to Ivory in the last edition and are poised to win the title for the first time in 35 years.

The Black Stars have been drawn against Uganda, Egypt and Mali in Group D.

Profile of the Players

Goalkeeper Richard Ofori (Wa All Stars, Ghana)
The former Ghana U-20 goalkeeper earned his first Senior National call-up for Ghana against Congo on the 1st of September and the all-important AFCON 2017 qualifier against the Amavubi of Rwanda in 2015.

Ofori has since been a consistent member of the team under Grant but yet to be in post to exhibit his talent.

The Wa All Stars shot stopper, a member of his side winning the 2015/2016 Ghana Premier League for the first time and was adjudged the best goalie at the end of the season.

Ofori made 27 appearances for his club, conceded 14 goals, had 15 clean sheets and helped his side to win 15 games out of 30 at the end of the season.

Ofori remains focused and determined to reach the highest level in his career.

The 20 year old chap who was brilliant for his former club WAFA was influential during Ghana’s appearance at the FIFA U20 World Cup in New Zealand. Despite the Black Satellites having a poor tourney, Tetteh exhibited an outstanding performance in Ghana’s 4-2 win over Argentina.

Tetteh enjoyed playing for as many as 4 national teams before joining the Black Stars. He first played with the U-20 team, the Black Satellites, where he helped Ghana finished 3rd in the African Youth Championship in Senegal and qualified for the World Cup in New Zealand.

The in-form player after gained a call up to the Black Meteors team who participated in the All African Games in Congo Brazaville as well as the Black Stars B team who were knocked out by Ivory Coast in the CHAN qualifier in 2015.

He then joined the Red Bull Salzburg from WAFA during the summer transfer window but was on- loan to the Club’s youth side Leifering.

Tetteh who also plays as a forward for Leifering netted five (5) goals out of 13 matches before leaving the local scene.

Tetteh’s impressive form earned him a call-up to the Black Stars in November 2015, when Ghana played Comoros in a World Cup qualifier and has since been a part of Coach Grant’s squad.

He has so far scored 10 goals in 20 matches for his club and on September 3 last year, Tetteh scored his first international goal for Ghana at the senior level.

He is expected to add his pace, dribbling skills and hunger for success as Ghana take on Uganda in her first Group D match on January 17 at the Stade Port Gentil, Gabon.