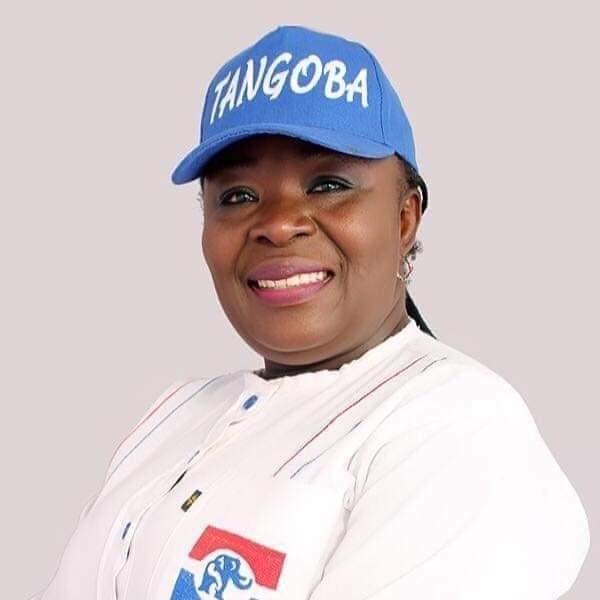 Ms Tangoba Abayage is a Ghanaian diplomat, politician and gender advocate, born on June 30 1964 at Pungu-Nembasinia, a suburb of Navrongo in the Kassena-Nankana Municipality (Navrongo Central Constituency) of the Upper East Region.

She was born into a family of nine to Mr John Abayage, a farmer, labourer and watchman, and Ms Mary Kallou, a petty trader who lived and worked at Sekondi-Takoradi in the Western Region for most their lives.

She was married and has two sons and a daughter, but presently separated from her husband. Ms Abayage started her elementary school at Essaman Roman Catholic Primary School in Sekondi in the Western Region and proceeded to Nana Anaisie Middle School Form two before sitting for Common Entrance Examination to gain access to Secondary School.
From 1977 to 1984 Ms Abayage acquired her Ordinary and Advanced Level Certificates at St. Francis of Assisi Secondary School, Jirapa, in the Upper West Region.

She then proceeded to the Institute of Chattered Accounting (ICA), Takoradi Polytechnic in the Western Region to pursue her Intermediate Certificate from 1986 to 1988.

From 2009 to 2012 Ms Abayage pursued Bachelor of Science in Administration with specialization in Human Resource Management from the University of Ghana, Legon.

Before Ms Abayage ventured into politics, and taught at Adiembra Junior Secondary in Sekondi-Takoradi in the Western Region as a National Service and Pupil Teacher from 1984 -1986 and from 1988 to 1989, she was an Accounting Assistant at Acheampong and Sons in Takoradi, in the Western region and a Senior Keeper at Irrigation Company of Upper Region (ICOUR) in Navrongo in the Kassena-Nankana Municipality of the Upper East Region 1990 to 1992.

From 1993 to 1995 and from 1995 to 2005, Ms Abayage was a Tutor at Zamse Secondary/Technical School and Bolgatanga Technical Institute respectively.

She was made Head of the Business Department, House Mistress and Senior House Mistress.
According to her, she was introduced into politics by the late Mrs Hawa Yakubu, former Member of Parliament for Bawku Central and has since risen through the ranks to become the current Upper East Regional Minister.

Apart from holding the position of Vice Chairman of the Korean International Cooperation Agency (KOICA) Alumni Ghana, from 2015 to 2017, Ms Abayage was the Western Regional Director of the Department of Gender before being appointed by President Akufo-Addo as the Ambassador of Ghana to Italy, Serbia, Slovenia and Montenegro until 2018

She was also Ghana’s representative to Rome Based Agriculture Agencies such as International Fund for Agriculture Development (IFAD), World Food Programme (WFP) and Food and Agriculture Organization (FAO).

In November, 2018, Ms Abayage assumed office as first female substantive Regional Minister of the Upper East.
In June 2020, Ms Abayage defeated Mr Joseph Kofi Adda, the current MP for Navrongo Central and Minister of Aviation in the NPP primaries to contest the 2020 elections as the NPP Parliamentary Candidate for the area.
Ms Abayage is also a Gender advocate and has chalked some successes in her career.

She She was adjudged the Overall National Best Teacher in the Technical-Vocational Category in 2002, contributed to mentor many students through teaching and grooming and was the producer and hostess of Women and Development Programme at Ghana Broadcasting Cooperation (GBC) URA Radio in Bolgatanga.

Ms Abayage has also undertaken several philanthropic activities such as, offering support to triplets in Chiana, in the Kassena-Nankana West District, celebration of Annual Kids Party for thousands of Kids annually, renovation of Kids Ward at the WAR Memorial Hospital in Navrongo, renovation of Teachers’ Quarters at Biu in the Kassena-Nankana Municipality and supplying 400 dual desks for schools in the Navrongo Central Constituency among others.