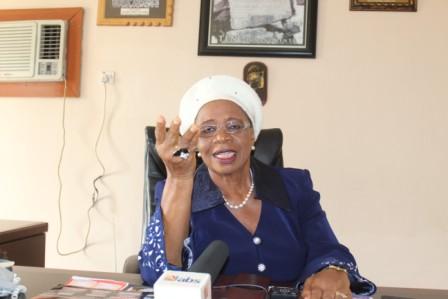 More Nigerians and stakeholders in Anambra state have continued to express their disapproval of the just-concluded National Assembly elections in Anambra State, with the former Governor of the State, Dame Virgy Etiaba and one-time President-General of the defunct Onitsha Markets Amalgamated Traders Association (OMATA), Chief Godwin Okeke advising the aggrieved candidates and vested interests not to lament but to take their grievances to the tribunal for redress. They also urged the voters to take advantage of the last ugly experience and troop out en masse to vote candidates of their choice, pointing out that the state governor, Chief Obiano needs like minds to work with to consolidate on the gains of democracy he has been delivering to the people.Speaking to newsmen in separate interviews in reaction to the outcome of the Senatorial and House of Representatives elections during the week, Dame Etiaba pointed out that the reports that got to her on the monumental display of lawlessness and electoral manipulations were disturbing to the point that she began to wonder if the new peace and secure environment in the State had passed away.

Dame Etiaba who is the First Woman Governor in Nigeria said the conduct of the NASS elections in her ward was relatively smooth and calm but quickly revealed that , ? in other areas, I learnt money exchanged hands and a lot of hitches and manhandling of people took place?.?

On the alleged connivance of the Independent National Electoral Commission (INEC) and security agencies during the election, Dame Etiaba who is the Proprietor of Bennett Etiaba Nursery and Primary School, Nnewi advised them as well as stakeholders to ensure that the March 28, ugly electoral experiences did not re-occur.

The former governor of the State who took over from Chief Peter Obi?after his impeachment recalled that it took the administration three years to recover its stolen mandate, advising that, ? no matter how long it takes? the ugly specter that took place on March 28 National Assembly elections, the truth will eventually come out. ?We were in court for three years after our hard-earned mandate was stolen and given to us by the voters, but we eventually reclaimed it. Nothing is lost. The God of justice will always avail the just.?
According to her, the people should not be deterred but ensure that the crucial April 11, 2015 State House of Assembly election created another opportunity for the people to get ready and troop out en masse to exercise their franchise in accordance with the dictates of their conscience.

Dame Etiaba emphasized the need for the people of the State to adhere to the wake-up call to support and encourage the Obiano administration on the forthcoming State Assembly election on April 11, this year, based on the good works he has done especially in the past one year.
?Even a blind person in Anambra State can testify that Governor Obiano has performed creditably. He has to carry on with his vision. Noting is supposed to dampen his vision. No matter how long it takes the aggrieved to pursue justice, the truth will surface.

In his own contribution, Chief Okeke who is the owner of G.U.O Motors Nigeria Limited, corroborated Dame Etiaba on the need to opt for justice to recover their mandate, and sued for peace, advising the people to remain prayerful as the outcome of the elections was an indication that God heard their many prayers for a peaceful election and transition.

Chief Okeke called on the voters to vote for APGA candidates in the State House of Assembly election, emphasizing that, ?… because they are the people that will support APGA to secure at least 90 percent of the seats in the State Assembly election, that is the only way this governor can sustain the tempo of development in all sectors of life across the State.?

According to him, ?God is using Governor Obiano to perform and record resounding achievements in just one year,? adding that any vote not cast for APGA would affect the pace of development and bring about challenges for governance and compel the governor to channel the fund which he would have used to consolidate on his good works to fight vicious political opponents and attendant lawlessness.

He condemned the flooding of security operatives including soldiers and deployment of armoured vehicles numbering four at Anaocha Local Government Area alone, as a ploy that could scare the voters and create the erroneous impression that the elections could degenerate into war, lamenting that many voters went home on sighting these military war vehicles.