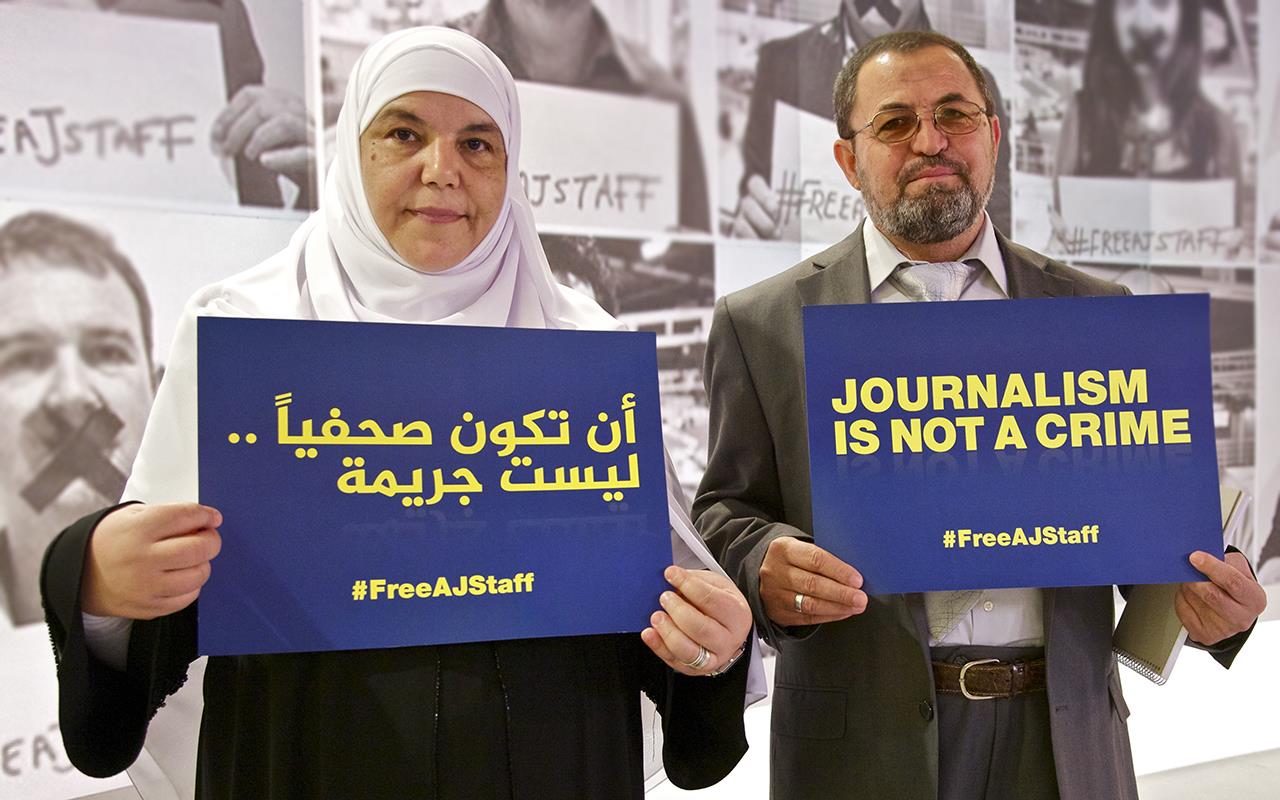 Prominent Egyptians have begun to call for the release of Al Jazeera?s journalists detained in their country.

The interventions come as Abdullah Elshamy was moved by the Egyptian authorities to an unknown location. Earlier his lawyer had asked the authorities to transfer him to hospital within 48 hours amid growing concerns for his life. He has been on hunger strike since 21?January 2014.

Hoda AbdelMoneim, head of AlHorreya Observatory for Detainees Rights, said today,?”Abdullah Elshamy is asking for his rights in a fair trial. He is detained unlawfully and no charges have been filed against him, although Article 10 of the Declaration of Human Rights states that every individual has the right to be submitted to a fair independent court.”

She also urged civil society, in a press release today, to pressure for the release of Elshamy to save his life after he exceeded 110 days of hunger strike.

Tests on Elshamy?s blood and urine conducted in a private laboratory have indicated his life is in serious danger. Medical experts state that he is now suffering kidney dysfunction, severe anemia and low red blood cell count.

After the results, his family tweeted:??Put @abdallahelshamy in your prayers. He’s between God?s hands and could lose his life anytime.?

“Abdullah is running out of time. We demand that he is admitted to an independent hospital immediately. With experts saying he may die in few days, every journalist, every organization and every human has to do something to save this 26-year-old journalist,”?said Al Jazeera spokesperson Osama Saeed.

Al Jazeera English?s detained trio are meanwhile due back in court on Thursday, 15 May 2014. In recent days, TV presenter Amr Adeeb called for the release of Al Jazeera?s staff, saying that press freedoms have to be upheld. Adeeb hosts a daily talk show “Al Qahera Al Youm” (Cairo Today) on the “Al Youm” (Today) channel. Speaking live on his show, he said,?”I am against jailing any journalist based on his work, regardless of what he reports. And this case is causing us embarrassment globally. In every interview with any Egyptian official on a foreign platform, a question about it is asked. I am totally against this attitude, because if I approve of it, I might be doing some work in Doha and get arrested and can’t say a word. Whatever was being reported and sent by these guys [Al Jazeera?s journalists] – and I know many of you will be against what I am saying, and you also know that I have never been on good terms with Al Jazeera – but there are regulations all over the world: journalists and reporters have immunity, even if you do not like what they report or find it harmful. And if journalists are being jailed because they report in a way that does not appeal to governments, you would find half the journalists of the world in jail!”

Katanga Alumni petitions for the release of three incarcerated students