Hadzrat Mirza Masroor Ahmed, the Spiritual Head of the Worldwide Ahmadiyya Muslim Community, has said the Community would never waver from its efforts to promote peace and justice in the world.

The Spiritual Leader speaking in a video telecast warned that rivalries between nations were intensifying and new battle lines were being drawn that could prove disastrous.

He charged world leaders to demonstrate a strong commitment to the ideals of Equality and Justice in their dealings with poorer nations.

Hazrat Mirza Masroor Ahmed, who is the Fifth Khalifa, speaking at 16th National Peace Symposium of the Ahmadiyya Community in London, said the neglect of the poor and the marginalized has partly contributed to conflicts and agitations in many parts of the world.

The Symposium was on the theme: “Critical Need for Peace. ”

The National Peace Symposium was out-doored in 2009 by the Ahmadiyya Community to honour individuals who have demonstrated a strong commitment to peace and development in various parts of the world.

The award is to celebrate such individuals and to motivate others to make conscious efforts to make the world a better place through innovation and engagement.

He said that nuclear war was no longer a remote or distant prospect, but rather a growing threat that could no longer be discounted or ignored.

Hazrat Mirza Masroor Ahmad warned of the catastrophic nuclear destruction that could ensue if nations do not show tolerance or strive to break down the causes of division between them.

He said: “If there is a nuclear war, we will not only be destroying the world today but we will also be leaving behind a lasting trail of destruction and misery for our future generations.”

He said hence, “we must pause and reflect on the consequences of our actions. We should not consider any issue or conflict, whether within a country or at an international level, to be insignificant.”

He said that nations were using conflicts in the Middle East as a tool to create dominance by building alliances and igniting further conflict.

He explained that feelings of resentment stem from the belief that existing indigenous citizens were being short-changed to fund and support immigrants.

The Spiritual Leader said the long-term solution to the immigration crisis has to be to establish peace in war-torn countries and to help the local people, who have been forced to endure lives of misery and danger to live peacefully.
He said “In the short term, where refugees or asylum seekers come to the West due to the prevailing political or religious conditions in their own countries, they should be treated with dignity and respect.”

He said at the same time, whatever support they were given should not be at the expense of existing citizens and that immigrants should be strongly encouraged to enter employment as soon as possible, rather than living off benefits for long periods.

“They should work hard, seek to stand upon their own two feet and contribute positively to their new society. Otherwise, if they are continually funded by tax-payers money it will inevitably lead to grievances,” he added.

He explained that the root cause of frustration and the resulting hostility, whether in the East or the West, was economic injustice and so it was essential that a concerted effort was made to bridge the economic divide amongst nations and their people.

The Most Reverend Kevin McDonald, Archbishop Emeritus of the Roman Catholic Archdiocese of Southwark commended the Ahmadiyya Muslim Community for its strong resolve in promoting peace.

He thanked the Community for drawing attention to the centrality of peace, for inviting people of different faiths and norms to come together.

More than 800 guests from across the world attend the unique event including members of the British House of Lord’s, UK Ministers, Secretaries of State, parliamentarians, diplomats, faith and civic leaders as well as representatives from numerous charities and faith communities and the media. 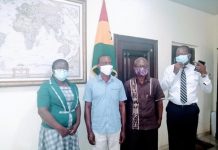