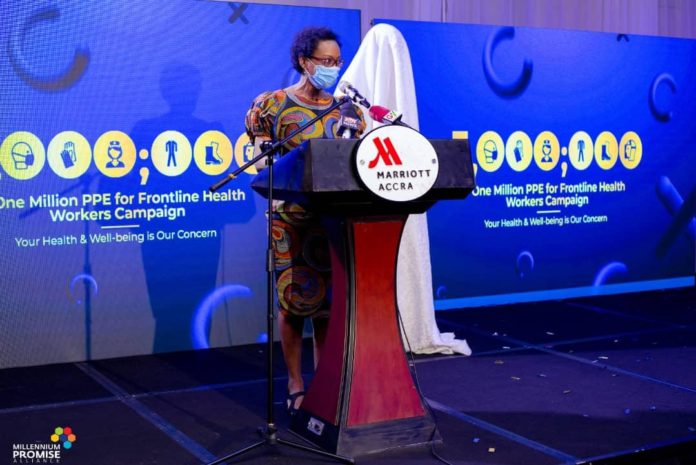 Madam Angela Trenton-Mbonde has called on the government and stakeholders to put in measures to protect and motivate Frontline workers to do more in the delivery of their services.

She said health workers play a significant role in the fight against the COVID-19 pandemic and care for other ailments on daily basis.

Speaking at the launch of the “One Million PPE for frontline health workers campaign,” an Initiative of the Millennium Promise Alliance she said the protection of Frontline Health Workers was critical in securing the human resource of the nation’s health facilities in such times.

She said vulnerable segments of the population, whether persons living with HIV, survivors of tuberculosis, persons with non-communicable diseases, such as diabetes and hypertension were all cared for by the Frontline Health Workers.

She said by protecting Frontline Health Workers, the whole community is protected.

Speaking on HIV responds she said a lot had been learnt from the HIV response which could help fight the COVID-19 pandemic adding that by observation and people’s experiences the organization understands and accepts that both viruses thrive on fear, ignorance, and inequalities.

She said it was important that the responses focused on people and engaged communities, were based on evidence and human rights, and reach and protect the most vulnerable and marginalized, without any stigma or discrimination.

She said there were widespread misconceptions and needless fear of people who had recovered from Covid-19, as they were believed to pose a health risk to others hence survivors were stigmatized and avoided.

” Ghanaians with symptoms are often unwilling to test for fear of being stigmatized if the result is positive. Responses centered on people and engaging communities based on facts will go a long way to protect the vulnerable and the marginalized against stigma and discrimination,” she said.

Community actors in the HIV response, like the Models of Hope, were effectively deployed to support the national effort. Models of Hope volunteers work to stop new HIV infections, ensure that everyone living with HIV has access to treatment, protect and promote human rights, and produce data for decision-making.

She said actors could carry out outreach for testing and help link people who test positive to life-saving treatment and to encourage persons on treatment to stay on treatment so that the virus in their bodies reaches an un-detectable state and therefore un-transmittable.

She said these community actors must be protected at all times not only because of the quality of the delivery in their work but more importantly sure that their lives are protected.

UNAIDS is the Joint United Nations Programme on HIV/AIDS, which leads and inspires the world to achieve its shared vision of zero new HIV infections, zero discrimination, and zero AIDS-related deaths.