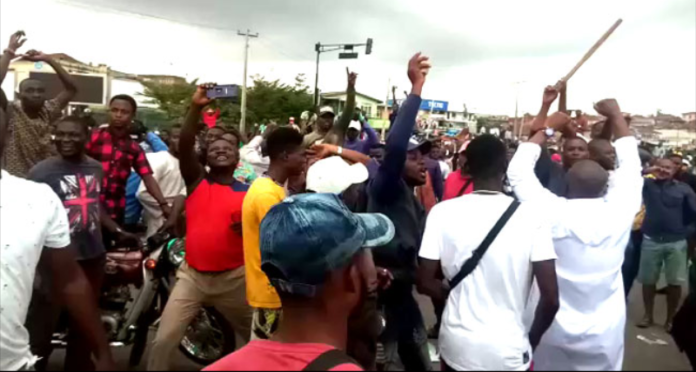 The convoy of Gboyega Oyetola, governor of Osun State in southwest Nigeria, was attacked by protesters on Saturday in Osogbo, capital of the state, an official said.


In a statement reaching Xinhua on Sunday, Timothy Owoeye, speaker of the Osun House of Assembly, confirmed the attack by EndSARS protesters who have been recently calling for police reform across Nigeria.

“I am disturbed by the sad news coming out of Osogbo where Governor Gboyega Oyetola was attacked during a solidarity walk with the EndSARS protesters,” said Owoeye.

Oyetola joined the protesters in Osogbo, promising that their demands would be looked into, and saying that he supported their peaceful protest, local media reported on Sunday.

However, some protesters wielded “dangerous weapons” and hurled stones at the governor’s car, forcing his convoy to speedily leave the scene after their vehicles were damaged, the report said.

Several people sustained injuries at the scene and were taken to a nearby hospital for medical attention, it added.

Opalola Yemisi, police spokesperson in the state, confirmed the incident to media on Saturday, saying that efforts were being made to control the situation and arrest the perpetrators.

In recent days, protests marked by “EndSARS” have taken place in major cities across Nigeria, demanding justice for those reportedly killed or maimed by the State Anti-Robbery Squad (SARS), a unit created by police with anti-robbery intentions.

The ongoing protests, the largest in Nigeria since the country returned to democratic rule in 1999, are mainly calling on the government to reform the police force.

On Oct. 11, police authorities disbanded SARS across police commands in the country, saying that such a move was in response to what Nigerians wanted.

President Muhammadu Buhari on Monday vowed to reform the police force amid the protests, saying that the disbanding of the special crime-fighting unit was the first step to “extensive police reforms” by the government.