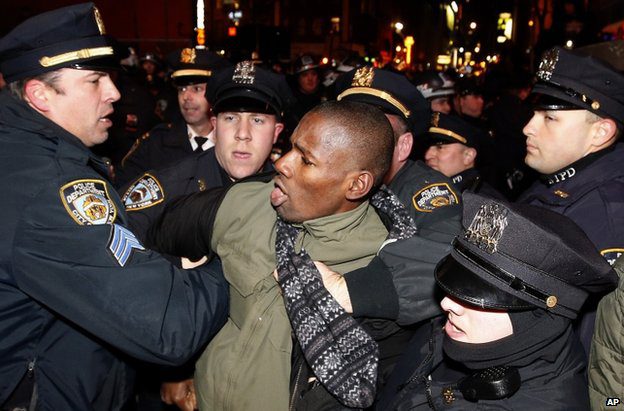 Protests have been held for a second night over the death of a black man held in an apparent chokehold by a white New York police officer.

Thousands of people took to the streets in New York and other US cities, disrupting traffic and holding sit-ins.

The protests began on Wednesday, after a grand jury decided not to press charges over the death of Eric Garner.

Civil rights activists are pinning their hopes on a federal investigation into the case.

The US saw a wave of race-related unrest only last week over the decision not to indict another white police officer who had shot dead a young black man in Ferguson, Missouri.

On Thursday night in New York, protesters carried coffins across the Brooklyn Bridge and marched in several groups through Manhattan, carrying banners saying ?Racism kills? and ?This stops today?.

?People are sick and tired of the systemic problems of racism in this country,? said one protester, Jason Pollock. ?We are out here in the streets to say that black life matters.?

Police in riot gear told protesters staging sit-ins that they would face arrest if they did not move along. Police arrested more than 80 people in Wednesday?s protests, though the demonstrations have been largely peaceful.

Washington was one of the other cities to see demonstrations

Smaller-scale protests were held in cities including Chicago, Washington, Denver, and Boston. In Minneapolis, some protesters blocked traffic by marching or lying in the middle of a highway.

Activists have called for another march in Washington on 13 December, followed by a summit on civil rights.

Mr Garner, 43, was stopped on a street in New York on 17 July on suspicion of selling loose, untaxed cigarettes.

After a confrontation with police officer Daniel Pantaleo placed his arm round Mr Garner?s neck. Mr Garner, who had asthma, was wrestled to the ground and restrained by force.

On video of the incident, he can be heard repeatedly saying ?I can?t breathe?. He became unresponsive and later died.

In Minneapolis, protesters marched down an interstate highway

The city?s medical examiner?s office found in the summer that Mr Garner?s death was caused by ?the compression of his chest and prone positioning during physical restraint by police?.

Police unions and Mr Pantaleo?s lawyer have said that he used an accepted takedown manoeuvre on Mr Garner, rather than a chokehold, which is banned under New York City police regulations.

Many politicians and activists criticised the grand jury?s decision not to bring charges against Mr Pantaleo.

He is also conducting a review of how to heal a ?breakdown in trust? between police and communities.

New York Mayor Bill de Blasio has said policing in the city ?has to change? and announced a retraining plan.

Meanwhile, a federal report on policing in Cleveland found a systemic pattern of reckless and inappropriate use of force by officers.