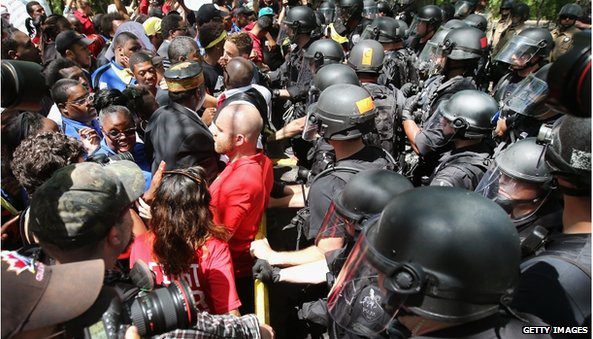 At least three protesters and one police officer were hurt and treated by medical staff on Saturday during clashes at an anti-lockdown protest in central London’s Trafalgar Square as the police ordered protesters to disperse because they failed to respect social distancing.

“Crowds in Trafalgar Square have not complied with the conditions of their risk assessment and are putting people in danger of transmitting the virus,” the Metropolitan Police said in a statement.

“This has voided their risk assessment and we have informed the event organisers they are no longer exempt from the regulations…Sadly, some officers have been injured while engaging with people,” said the statement.

Thousands attended Saturday’s protest with some throwing water and bottles at police, while chanting “pick your side”, the BBC reported.

Police used batons against protesters, leaving some with visible injuries as several protesters were led away in handcuffs, according to the report. Some media reports said that several officers were injured in the clashes.

Rules in England limit indoor and outdoor gatherings to six people. Protests are exempt from the rule-of-six restrictions, but demonstrators must maintain social distance and a risk assessment must be submitted by organizers.

On Friday, London was placed on the national COVID-19 “watch list” as an area of high concern. As the coronavirus cases continue to rise in the British capital, the mayor of London, Sadiq Khan, warned that London is “at a very worrying tipping point right now.”

Meanwhile, countries, such as Britain, China, Russia and the United States, are racing against time to develop coronavirus vaccines.

The British government’s Chief Scientific Adviser Patrick Vallance said Monday that it is possible that some vaccine could be available in small amounts later this year, but it is more likely that a vaccine will be available early next year, although that is not guaranteed.

One killed, nine others injured in Nigeria bus collision