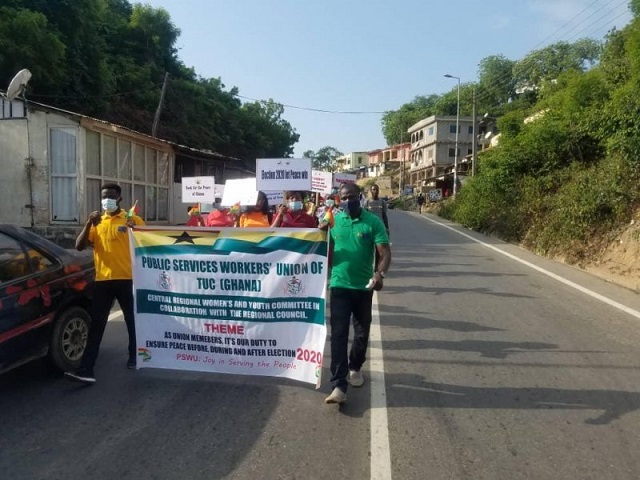 Members of the Public Services Workers Union (PSWU) in collaboration with the National Commission for Civic Education (NCCE) has embarked on a peace walk to drum home the need for peace in the upcoming general elections.

The activity was aimed at creating awareness for the public to embrace peace before, during and after 2020 elections.

The two-hour walk was started from Mfantsipim Junction through the principal streets of Cape Coast and ended at the Victoria Park.

Alhaji Aliu Mohammed, Deputy Regional Director of the NCCE called on the public to strictly adhere to the rules governing elections in other not to be cheated.

“If citizens are aware of the rules of elections they won’t be cheated and will abide by the rules and regulations related to the elections”, he said.

He stressed on the need to educate the people for them to be enlightened about the steps and expectations towards a peaceful election.

Mrs Ellen Osei, the Regional Women’s Committee Chairperson for PWSU reminded the public that women and children were the most affected in the times of war and violence and called on the public to ensure peace in the general election.

She therefore urged all to eschew any activity that will generate into conflict and violence and urged the public to strictly follow the safety protocols of wearing nose masks and washing of hands with soap and water, particularly during the polls.