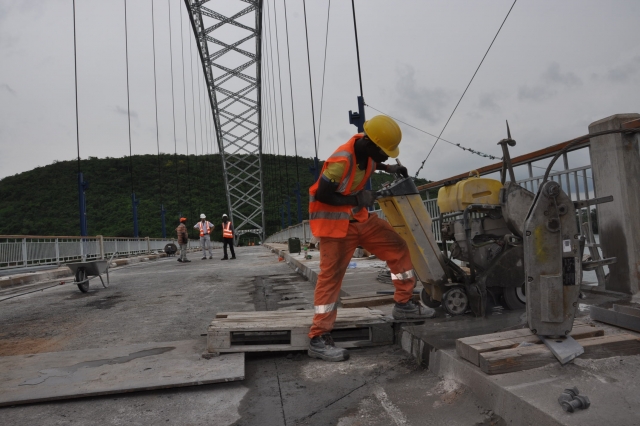 The Buipe and Yapei bridges in the Northern Region have been closed leaving commuters and vehicles using that route to Tamale and other parts of northern Ghana stranded.

There is public outcry as the problem keeps compounding daily, with the closure of the bridges entering the fifth day on Saturday.

However, no sign of construction equipment has been sighted at the two sites to start the rehabilitation works, which had been cited as reasons by the Ministry of Roads and Highways for the closure.

The stranded passengers include traders and lactating mothers, who had carried their babies for days without any success of crossing the bridge.

There are also articulated trucks carrying cattle with some dying from hunger and thirst, while vegetables and fruits decomposed from the waiting trucks.

In an interview with the Ghana News Agency, Mr Solomon Aboagye, a passenger, expressed worry at the condition in which mothers and their babies found themselves.

He said there were major technical defects on the two bridges apart from their ages, adding; “This is the third time they are carrying out repair works this year, but their condition keeps deteriorating because the technical men fail to do the right things.”

Mr Aboagye wondered how much of the tax payer’s money had been wasted repairing the two bridges and called for financial and technical probes into the repair works.

He charged government to act accordingly to prosecute persons found culpable for any wrong doing.

Commuters have three options to choose from in accessing the Northern and Upper East regions, however, some drivers the GNA spoke to complained about the long distances and bad nature of the roads on those designated routes.

Information gathered from Yeji in the Brong Ahafo Region, which is the main host to the Central Corridor route, indicates that hundreds of commuters had to queue long hours and days to catch the ferry, which takes about two hours to cross with some vehicles on board.

Madam Jennifer Abilba, a passenger, said she and the other passengers had to contribute additional GHc10.00 as top up to an OA Tour and Travel Bus to use other routes on the Western Corridor to their destination.

“We had to battle with some of the passengers to come to a consensus to do the top up. Travelling on this road has become frustrating these days,” she added.

Large holes had been created on the Yapei Bridge, with some of the rods exposed, apparently from the wear and tear of vehicular movements and the lifespan of the bridge.

Hundreds of vehicles ply the Kintampo-Tamale Road daily, mostly to the Northern and Upper East regions and neighbouring Burkina Faso, Togo, Niger, and Mali among other North African countries.

Most of these vehicles are heavy duty ones that carry large quantities of goods out of Ghana using the Kintampo-Tamale Highway.

There are combined Police and Military blocks and patrols preventing vehicles from moving at both ends of the two bridges.
GNA/Newsghana.com.gh