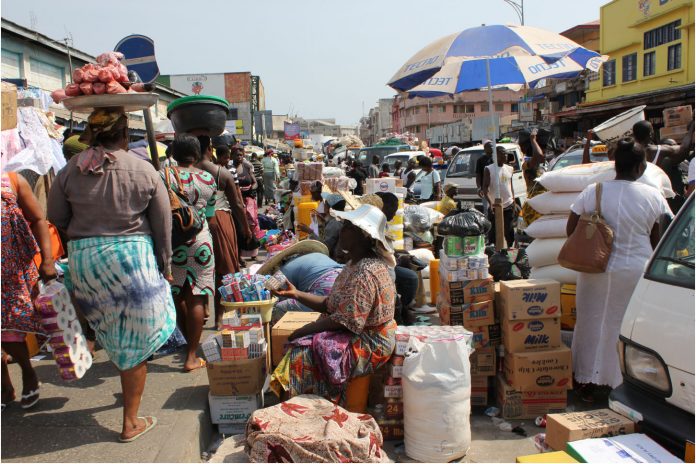 Mr Mohammed Adjei Sowah, the Mayor of Accra, has appealed to the public to desist from overcrowding market centers within the Accra metropolis all in the quest of restocking food.

Rather, he urged them to restock food from markets within their communities to ensure the social distancing protocol outlined were adhered to in a bid to stem the COVID-19 pandemic.

Mr Sowah made the appeal in a media briefing after he accompanied the Military hierarchy, led by Lieutenant-General Obed Boamah Akwa, Chief of Defence Staff to tour some markets and principal streets in Accra being cleaned to assess the progress of work.

The Mayor said he was baffled by the many who continued to travel several distances to some major markets in the city centre, particularly to Agbogbloshie, a major foodstuff market to purchase food stuffs even though they could do so within their localities to avoid overcrowding.

The Mayor, therefore, urged the security at the various check points to ensure strict enforcement of the lockdown directive, including; discouraging people from coming into the city center to avoid any unforeseen circumstances.

“That is the essence of the lockdown so when an exemption is given for the food it does not mean that you should travel from Amasaman to Agbogbloshie to come and buy food stuff and go away because from Amasaman to Accra there are lots of markets. We are activating all community markets so people can go there,”he added.

On the clean-up exercise, Mr Sowah said the Assembly was leveraging on the opportunity presented it by the COVID-19 outbreak to improve sanitation situation in the metropolis.

He said aside the desilting of choked drains and the cleaning of all public open places, the Assembly was also encouraging households to bring out their waste for proper disposal.

The exercise is being organised by the Ministry of Sanitation, through the Accra Metropolitan Assembly in collaboration with the Ghana Armed Forces, Zoomlion Ghana and other sanitation partners.
The three-day exercise is to rid open public places in the capital of filth.

Colonel Eric Aggrey-Quarshie, the Director of Public Relations at the Ghana Armed Forces said the exercise was a reinforcement of the services’ relentless contribution to national development.

The Ghana Armed Forces has deployed 400 all rank officers to participate in the exercise, which started on Friday, to rid public places in the metropolis of filth.

He urged city authorities to sustain the cleaning activities to maximise the health benefits and ensure food and public safety.

On Monday, March 30, some parts of the country including; Accra, Tema, Kumasi and Kasoa in the Awutu-Senya East Municipality, entered into 14 days partial lockdown as part of measures to contain the spread of COVID-19.

Ghana, as on Sunday April 05, had recorded 214 confirmed cases of the disease with five deaths and three recoveries.