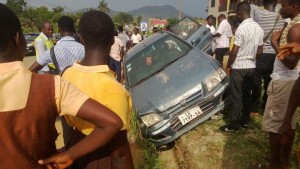 A 4-year-old boy, Bright Abeku, a pupil of Sarkodie School, met his untimely death Wednesday morning after he was crashed by a private car in Koforidua, the Eastern regional capital. The Mitsubishi car with registration number ER 2198-14 knocked Abeiku and a friend on their way to school.

The unfortunate incident occurred in front of St. James Hotel in Koforidua after the vehicle reportedly veered off the road and crashed into the school children.

It is not yet known what caused the vehicle to skid off the road causing the accident but Eastern Regional Police PRO ASP Yaw Nketia-Yeboah said investigations have begun into the incident.

The friend of the deceased, aged 8, sustained severe injuries and was taken to the regional hospital for treatment.