Two hundred and ten (210) Danish pupils and their teachers have arrived at Malshegu, a community in the Sagnarigu District of the Northern Region as part of a week-long cultural exchange programme. 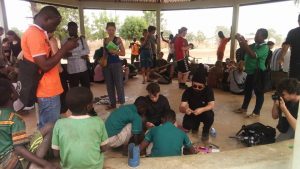 The Cultural Exchange Programme, which is an annual initiative of the Youth Empowerment for Life (YEfL), a Tamale-based non-governmental organisation, and the Ghana Friendship of Denmark, is aimed at affording young people opportunity to learn and share various cultural perspectives.

This year’s programme, which is the second in the series, will see the participating Danish pupils, who were drawn from Hald Ege Boarding School in Denmark, interact with pupils of Malshegu Roman Catholic Junior High School (JHS).

As part of the programme, a youth exchange rally was organized for participants, who were from the ages of 14 to 15 at Malshegu on Wednesday where they took part in games, dance, arts and film making to exhibit their talents.

Madam Vera Jawol Magan, Director of YEfL, who briefed the Ghana News Agency during the youth exchange rally at Malshegu, described the initiative as very important since it opened participants to experiences in other parts of the world.

Madam Jawol Magan said activities undertaken during the exchange programme helped to build the confidence of participants as well as let them tell their stories in their own ways.

Mr Junker lauded the Cultural Exchange Programme expressing hope that the number of Danish pupils participating in the initiative would be increased to about 1500 the following year.
Caption