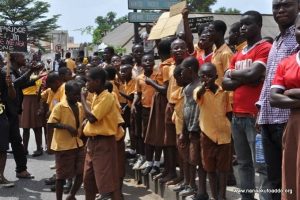 School pupils at Soda D/A School in Maame Krobo  in the Affram plains south district of the Eastern region and their parents are expected to embark on peaceful protest today, Monday January 16, 2017 over attempts by headmistress to transfer 15 teachers.

The headmistress is said to be adamant despite an  intervention by the chiefs of the area and Parent Teacher Association (PTA) of the school.

Meanwhile, the district director of education is expected to visit the Soda D/A School today to intervene in what appears to be a raging rift between authorities of the school and parents.

It would be recalled that authorities transferred all teachers from Soda D/A Junior High School (JHS) at Maame Krobo.

This en-bloc transfer came as a result of a petition the teachers wrote to the directorate seeking to have in depth knowledge on the replacement of their head teacher arguing that most of them are qualified to head that position.

The transferred saw the teachers dispatched to various villages in the area.

The school has been closed down since that day where teachers have been asking if a petition is a crime.

According to the directorate, the teachers should have done that enquiry verbally but not in a written form.

This written posture of the teachers angered the directorate which transferred all the teachers.

Chiefs and elders of the community went to apologize on behalf of the teachers about four months ago but the directorate turned them down.