A scandal is snowballing within inner sanctum of the Private Universities Students Association of Ghana (PUSAG), where an attempt to micro-manage embezzlement connected to a GHc30,000 contract with Access Bank, is spilling out.

What’sUp News has picked it up from sources that Shaibu Dawud, President of PUSAG recently escaped impeachment by the skin of his teeth after two executives petitioned the Judicial Committee and successfully argued to prove that he had schemed to personally enrich himself from PUSAG’s Gh30,000 contract with Access Bank.

Shaibu Dawud, had acted together with PUSAG’s Director of International Relations, Billson Bright, to skim at least Ghc2,000 that had been furnished to PUSAG by Access Bank. The two conspirators had allegedly also schemed to sign the GHc30,000 contracts with Access Bank on the blind side of all other executives.

According to the facts, PUSAG’s President and Director of International Relations had crafted a contract, in which Access Bank would give PUSAG GHc30,000 worth of sponsorship for the 2018 version of its Annual Games and Entertainment, in exchange for PUSAG’s leadership getting 10,000 students to open bank accounts with Access Bank. The two had however crafted the contract secretly.

Access Bank duly delivered its side of the bargain, furnishing PUSAG with an extra GHc2000 for a press conference to introduce and promote the Annual Games.

According to sources, they had not been able to pocket the whole GHc30,000, because Access Bank had provided it in sponsorship packages.

PUSAG’s Media Relations Officer, Adutwum Sadiq and the General Secretary Akanimo Entuks, who petitioned the Association’s Judicial Committee to impeach the President and remove him along with the Director of International Relations Officer over the issues, successfully argued out their case.

However, the Judicial Committee, presided over by Chief Justice George Baffuor, ruled that such an impeachment would soil PUSAG’s name and also disrupt the Association’s calendar which has fixed the emergency Congress on October 20th after confusion disrupted the congress in September and so the issue should be kept under wraps for the time being.

However, the issue has not gone down well with students who lost many opportunities because of the mess, including paid internships. 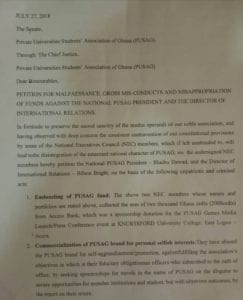 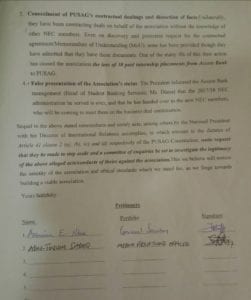 MoE and three NGOs to bring 70,000 children back to school

The New Balanced Contract Between People and Governments