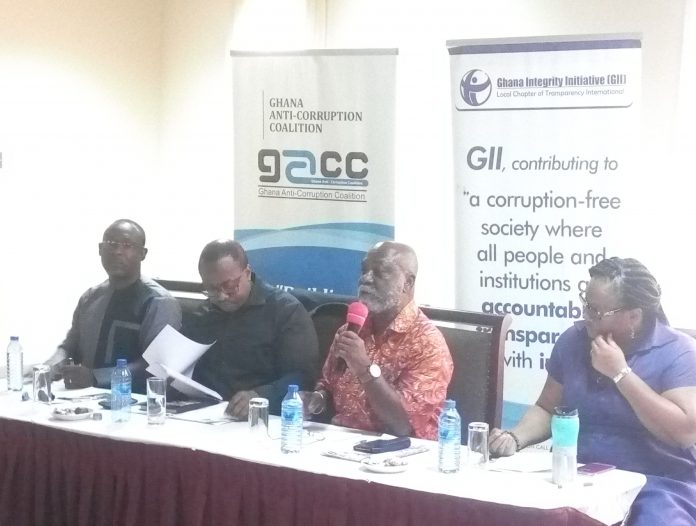 There has been many arguments and controversies surrounding the 1992 Constitution, vesting powers to prosecute in the hands of the Attorney-General (A-G), and until that provision is amended, the Office of the Special Prosecutor (OSP) would be toothless.

The Office of the Special Prosecutor Bill, 2017, is to establish the Office of a Special Prosecutor, as a specialised agency to investigate specific cases of corruption involving public officers and politically exposed persons in the performance of their core functions, and as well as persons in the private sector implicated in the commission of corruption.

However, the Special Prosecutor will prosecute the offences on the authority of the Attorney General.

The bill has since scored a lot of controversy with legal persons, including Dr. Raymond Atuguba and other CSOs, who has insisted that, it is illegal and will not pass the test if sent to the Supreme Court.
Speaking on the theme; “CSOs on the OSP Bill,” Senior Researcher with the CDD, Ghana, Dr. Kojo Asante, said the appointment process was key to the independence of the office.

He however suggested that, the selection process of the SP, should be opened to interested and qualified members of the general public.

Saying, the selection of the applications must go through a rigorous process, and pruned down to three, who would then be presented to Parliament for vetting and subsequent approval by majority of the parliamentarians.

Meanwhile, counting on Parliamentarians on its vetting and approval, they did not show up in Parliament on Thursday concerning the presentation of a select committee’s report on the OSP.

Although, the House listed it on the Order Paper for presentation, the Majority Leader, Mr Osei Kyei-Mensa-Bonsu, told the House that the Committee on Constitutional, Legal and Parliamentary Affairs was still holding consultations on the bill.

The Vice-President of IMANI Ghana, Mr. Kofi Bentil, in his view said, the appointment needs to be transparent so that the person who is to be appointed would be accountable to the people of Ghana.

Emphasizing on the point that, when the appointee is seen not to be effective in delivering his/her core mandate, the people could channel their grievances against the person through their representatives in Parliament.
Mr. Bentil, also tressed that, if care is not taking on the issue of the SP, the country would be establishing some kind of a monster on itself, in stead of an independent prosecutor.

Other CSOs also advocated, there should be an amendment to Article 88 (4) of the 1992 Constitution, to make way for the establishment of the office, rather than the use of an Act of Parliament.

They said any attempt to establish that office through an Act of Parliament, would be a recipe for compromise on the independence of the special prosecutor, and as well as the tenure of office.

Prof. Kwame Karikari, Dean of School of Communication Studies, Wisconsin International University, as the moderator of the dialogue, on behalf of the other resource persons urged that, the appointment of the Special Prosecutor as contained in the bill, should be done in a transparent and open manner to prevent any doubts of alignments.

The programme was organized by the Ghana Anti-Corruption Coalition (GACC) in collaboration with the Ghana Integrity Initiative (GII), Ghana Centre for Democratic Development (CDD) with funding support from Open Society Initiative for West Africa (OSIWA) and Strengthening Action Against Corruption (STAAC-Ghana), on 12th October, 2017, at the Coconut Groove Hotel in Accra.

Other participants at the dialogue were, the Programmes Manager of GII, Mary Awelana Addah, Samuel Obeng, Executive Director of Parliamentary News Africa and many other CSOs.