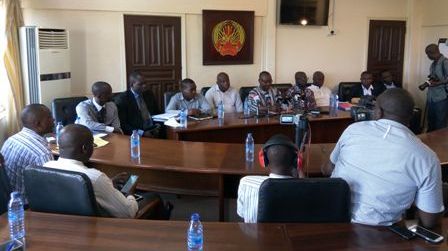 The PURC on May 24, issue a directive ordering the ECG to suspend the implementation of the company’s new billing software until further notice.

Addressing a news conference in Accra on Monday, Mr Ato Meaning Bondzi-Quaye, General Secretary of the PUWU said the directive had exposed workers to a number of acts of intimidation, abuse, threat, and physical assault.

He said the PUWU considered the act of the PURC as an interference calculated to cause public disaffection towards the company.

Mr Bondzi-Quaye said over the years, Government had given assurances to pay off its debt to the company, but not much has been done to actualise the promises and the outstanding debts coupled with the continued consumption of power by Ministries, Department and Agencies is seriously affecting the revenue generation of the company.

He said it is clear that the management of the ECG had not shown the requisite leadership and resolute drive to get government organisations to pay their debt and for the power they are using.

The PUWU General Secretary said it has served notice to all government institutions owing the company and those who are not on prepaid that with effect from June 20, the ECG would embark on a massive disconnection exercise to retrieve all arrears and ensure that all institutions pay for the power they consume every month.

He also said the PUWU endorsed the ECG’s objection and opposition to the government on the decision to give the company out to a private investor on a concession for a period of 25 years.

He said the policy is not the best option to bring reforms to make ECG more efficient and profitable.

Mr Bondzi -Quaye added that the challenges of the concessions include high tariffs, less attention to rural electrification, monopoly in the energy distribution section, the suffrage of local content, the repatriation of profit generated outside the country, handing over of virtually obsolete assets to government after 25 years.

“Others include the idea that foreign investors would pack out at the sight of any possible threat that can affect their returns, no example of a real success story of a concession in any developing and middle income countries with network similar to ECG and job losses with its attendant negative social impact on the economy.”

The PUWU suggested some alternatives to government in order to serve the country better including addressing the leadership problem of the company by appointing a dynamic and competent leadership with a fixed tenure of about five years contract.

It provided the same conditions promised by the private investor to create the enabling environment necessary to enable the company to operate efficiently.

“The other alternatives are government should allow adequate time ‘about three years’ to seriously try the Strategic Business Unit concept that has been commence in the Ashanti Region, use a five- year period of the Millennium Challenge Compact (MCC) to prepare ECG and list it on to the Ghana Stock Exchange with government retaining a slim majority or a significant minority.

Government should also raise funds from local sources through the stock exchange or Pensions Funds to invest in the energy sector to produce a state of the arts technology and equipment to eliminate waste in the distribution of activities of ECG as well as an improved network.”

Mr Bondzi -Quaye said the PUWU is not asking government to abrogate the MCC compact, but requesting that the government and the MCC should review the Private Sector Participation project under the ECG Financial and Operational Turnaround Project in the compact and modify it.

It included pragmatic steps or measures that could bring efficiency and profitability to ECG so as to pay power producers and other suppliers to ensure the smooth running of the sector to the benefit of Ghana and Ghanaians.

The General Secretary added that, “as workers of ECG, we have done our best to ensure accommodate the threats, insults and abuse from a cross section of the public and engaged with authorities both within and outside the company to ensure peace and harmony”.

“However, we have realised that the people who are supposed to provide the needed congenial environment to enable us do our work have remained silent and have turned a blind eye for us to be at the mercy of the public.”