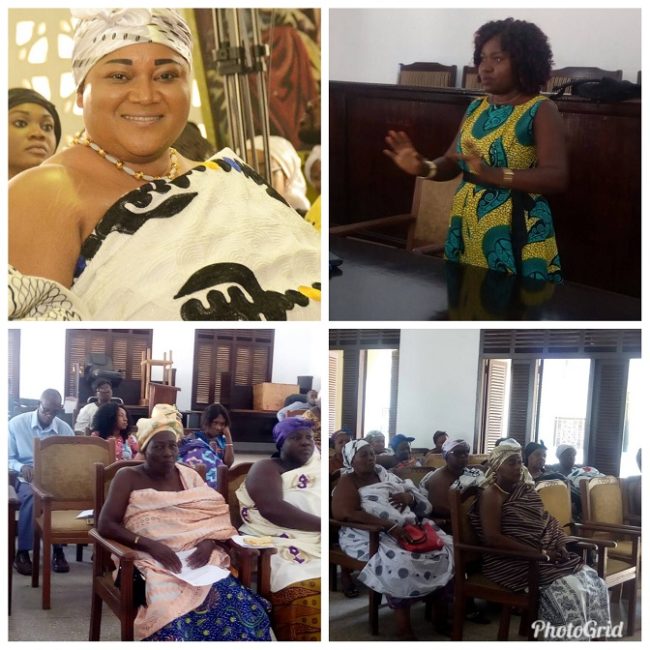 Acting Regional Manager for the National Population Council, Madam Mercy Sefah-Peprah has humbly implored t Queen Mothers to advocate for the End Child Marriage project and to spearhead and champion the course to protect the plight of the young and beautiful ladies in their various communities.

She was speaking at the second meeting in the year for the “Asanteman Queenmother Association’s Bo Obra Pa” Program, which is a UNFPA Support Program in Kumasi at the Ashanti Regional House of Chiefs at Manhyia.

Madam Sefah Peprah, schooled the Queen Mothers how to reduce rapid population, the significance of Family Planning, the effects of High Population, the end result of early child marriage and many more.

Going on, the Ashanti Regional Manager for the National Population Council, further highlighted on some of the causes of early marriages saying, they are largely influenced by cultural beliefs, poverty and societal pressure, lack of effective supervision from Parents on their children, lack of proper communication with them, lack of financial aid from the Family or Parents.

Adding that, in African countries, the importance of preserving family honour and girls virginity, is such that parents push their daughters into marriage well before they are ready believing that, marriage safeguards against ‘immoral ‘or ‘inappropriate behaviour’.

Other major courses she said, are when conflicts, disasters and emergencies increases, the economic pressures on households and many families that wouldn’t previously have considered early marriage, then turn to it as a last resort.

She indicated that, this practice is inimical to child development, thus, early marriage takes away the young girl’s opportunity to be physically, psychologically, emotionally and financially ready for the responsibilities of marriage and childbearing.

Early marriage increases social isolation and pushes the girls into a cycle of poverty, gender inequities, and higher risk of dying from complications of pregnancy and childbirth. Early marriage forces young girls to assume responsibilities and handle situations for which they are often physically and psychologically not ready for.

Moreover, Madam Sefa-Peprah added that, Girls who are married are less likely to have an education. Due to poverty, most families’ sacrifices the education of their girl child and force her into marriage to relieve their financial burdens.

Nonetheless, “girls forced into early marriages, faces higher risks of death in child birth, malnutrition, hazardous work and the worst forms of child labour,” she said.
She said “About 700 million young girls, less than 18 years old gets married and 31.8% of them does not need to give birth again.” Thus it increases the population.

Therefore, she changed the Queen Mothers to help the youth and those who do not need unwanted babies to start practicing family planning method, in order to reduces the High Population rate, which is one of the causes of high population rate, migration and trade, that triggers the Ashanti Region population alone to about 4 million.

Meanwhile, the President Of the Asanteman Traditional Queenmothers and the Paramount Queenmother of Asante-Mampong, Nana Agyakoma Difie, on her part at the event charged her colleague queen mothers to caution parents and the youth, more especially those under 18 years to eschew early child marriages to help sustain the lives and plight of the vulnerable girls in their Communities.

According to Nana Agyakoma, it would take a collective and significant efforts to deal with the problem of child marriage, indicating that, “child marriages are deeply rooted problems and will require a lot of work to eradicated.”

She noted that, there was no way this issue could be dealt with without the involvement of traditional leaders, especially queen-mothers, and therefore, urged all stakeholders to collaborate with them to end the canker.

The programme saw a successful end with all stakeholders, CSOs, Queen Mothers drawn from across the Ashanti Region and many more.