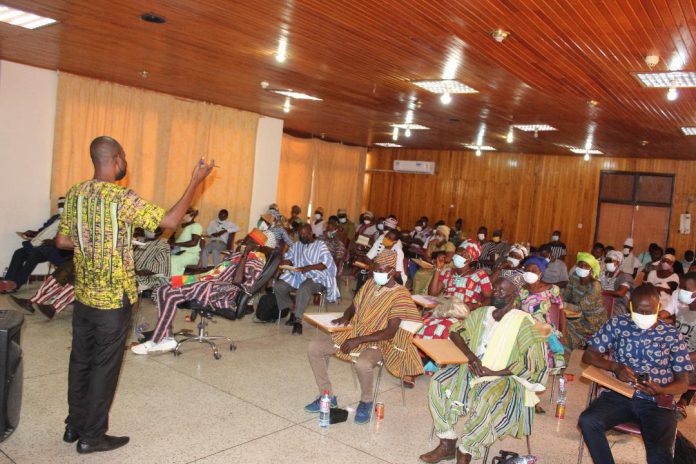 Queen Mothers in the Bongo Traditional Area in the Upper East Region have staged a campaign to help fight early child marriage, teenage pregnancies and Sexual and Gender Based Violence (SGBV) issues in the area.

The Queen Mothers made the disclosure at a dissemination workshop on the evaluation of the Safe and Protective Environment for Adolescent Development (SPREAD) Project held in Bolgatanga, the regional capital on Monday.

The SPREAD project funded by Global affairs Canada through UNICEF, is being implemented in 30 communities in in six districts in the Upper East Region namely Builsa South, Bongo, Talensi, Bawku West, Kassena Nankana West and Nabdam.

It seeks to build the capacities of adolescents and communities including their structures and duty bearers to create an enabling environment that protects children, prevents early and forced marriages and teenage pregnancies as well as prevent and respond to SGBV.

The SPREAD Project which had the ultimate goal of contributing to the reduction of early child marriage, teenage pregnancies and SGBV in the region begun implementation by the Youth Harvest Foundation Ghana (YFG), NGO in 2019 with funding support from UNICEF and ended in this year’s March 2021

Speaking at the SPREAD evaluation forum in Bolgatanga , the Queen Mother of Bongo-Feo , Pognaba Agamboka Felicia explained that as Queen mothers, they were very disturbed that the traditional area had always been on the news as being one of the leading areas in the region that records higher number of early child marriage, teenage pregnancies and SGBV.

She said as part of the campaign strategies, they would be collaborating with the Ghana Education Service, the Ghana Health Service and the Department of Social Welfare and Community Development to visit all Senior and Junior High Schools including homes in the District to give talks about the canker.

“We have also resolved to collaborate with the Bongo Community Radio to provide us a platform to educate the entire communities in the District on the need to stay away from such problem”, she stressed.

The Queen Mother of Vea Community also in the Bongo District, Pognaba Amoah Bright, lamented instances where some parents accepted and welcomed to their homes school girls who are brought to their homes by their sons to perform home chores.

The Programme Manager of YHFG, Mr Albert Akafari , explained that the essence of the forum which brought together stakeholders including chiefs, queen mothers, Assembly members, Heads of departments from Government state agencies including the Ghana Health Service(GHS), Education Service(GES) , the SPREAD Project Ambassadors, the Media among others was to disseminate the draft of the evaluation report of the SPREAD Project and to solicit inputs from the stakeholders for the final report.

The Programme Manager who lauded the Queen Mother for the Bongo Traditional area for the campaign strategy to help fight Early Child Marriage, Teenage Pregnancy and SGBV, said it fits into the sustainability element plans of the project.

He appealed to the other project Distracts to emulate same example of the Queen mothers of the Bongo traditional area and added that the formation and the capacity building training for the Ambassadors of the SPREAD Project and the collaboration with other stakeholders including the GES, the GHS and the Department of Social Welfare and Community Development are all meant to sustain the project implementation process