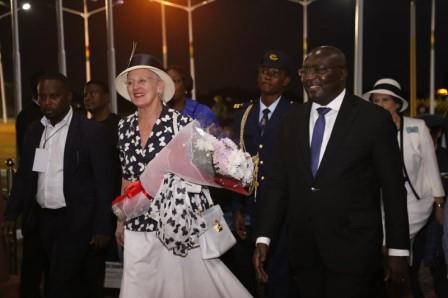 The Queen of Denmark, Margarethe II, after her three-day State Visit, said her experience of Ghana was very wonderful and would be a lasting memory.

She stated at a media conference: “I will like to tell everybody that my three days in Ghana has been really wonderful. I have been so kindly been received by, first all, the President, and also by everybody else, that I have come into contact with.

“Really it was a wonderful experience and these days will be something I will always remember. “It’s been three wonderful days. I have enjoyed every moment and I am very pleased to have been able to see for myself what Ghana is like; and I’m most impressed.”

She was addressing the media at Senchi, in the Eastern Region, on her experience, before she departed to Denmark.

Queen Margarethe described Ghana as “a wonderful country with so many opportunities”.

She said the relationship between Ghana and Denmark had always been a good one and expressed the belief that her visit would even
better help to deepen the ties.

She said the 39 representatives from 39 Danish firms that she travelled with; who participated in various discussions, all expressed the interest to explore the investment opportunities in Ghana, with some already having invested in the country.

Sharing her reflections on the shared past between Ghana and Denmark after her visit to the Osu Castle, formerly known as the Christiansborg Castle, the Queen said the Castle represented a remote history in many ways and it was an important story, which seemed unbelievable in this modern days.

“But it is very important not to judge the past by our present standards,” the Queen admonished.

The Danish Foreign Affairs Minister, Mr Anders Samuelsson, who addressed the media together with the Queen, said: “We feel very optimistic leaving Ghana now because we have made some good talks and very constructive talks as well”.

He said the Danish business team had good talks with Ghana’s Minister of Foreign Affairs and the Minister of Trade and also had some good business meetings.

“Going from aid to trade is really the right thing to do now and I do agree with the President of Ghana that this is the way forward, and think it’s going to be good and deepened cooperation,” he noted.

He said President Nana Addo Dankwa Akufo Addo’s focus of making the business environment secure, progressive and attractive to investors all around the world was a good focus just as the resolve of educating the next generation.

“These two things combined will certainly make it very attractive to do business in Ghana,” he stated.

As part of the Queen’s itinerary, she paid a courtesy call on the chiefs and people of Akwamu in the Eastern Region.

The visit to the Akwamufie was the climax of the Queen’s visit of various cultural and historic sites that formed the itinerary of her first time visitation to Ghana, as a West African nation.

Prior to the visit to the Akwamu Palace, Queen Margarethe earlier in the day visited the Odumase/Agomanya Market, which is well known as a popular beads market, to interact with the dealers of the beads and also have a feel of a true Ghanaian marketplace.

The Queen also visited the Cedi Bead Factory, a popular bead manufacturing centre at Agomanya, where Mr Nomoda Ebenezer Djaba, the Chief Executive Officer of the Factory, briefed the Queen on the process of professional bead making.

At the Akwamu Palace, Odeneho Kwafo Akoto III, the Paramount Chief of Akwamu, on behalf of the people of Akwamu State, received
Queen Margarethe and her entourage at the palace amidst drumming and singing of traditional music to welcome the Queen.

An elder at the Palace recounted the history of the Danes, who shared a history of the dark story of slave trade, and the interesting story related to shifting alliances and conflicts between the Danes and the Akwamu people.

The Christiansborg Castle, originally built by the Danes in the17th Century, has changed ownership several times.

History has it that in the 1693, the Akwamu people, disguised as tradesmen, took over the Castle.

Conflicting reports say the Danes had either drunk too much schnapps, or were weakened by sickness.

The Elder at the Palace, however, said, a Prince of Akwamu, by name Asameni, who went to the Castle to study the Dutch Language, in 1693, later hatched a plan to overtake the Danes and later took the keys to the Castle to the Akwamu Palace.

Later, when the then Akwamu King, Asameni, sold the Castle back to the Danes for 12 kilograms of gold, but he kept the keys in his possession.

Since then, the Akwamu people have kept the keys safe as a trophy and a proud symbol of the resistance of the Akwamus against the Danes.

Queen Margarethe on her part, said she was happy to be there to hear: “Some of your fascinating stories about the connection between Denmark and this part of Ghana in a long time ago.

“But I’m touched to know that you still cherish the memory of those times and that you keep up the story. And that is something I should take back with me to Denmark, in particular, the memory of this part of Ghana.

The Queen was later taken to a room where the keys were being kept to have a look at them.