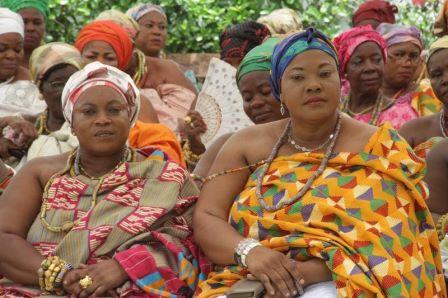 Queenmothers within the Awutu Beraku Traditional Area have called for the institution of proper bye-laws to deal effectively with sanitation and hygiene matters in their communities.

They expressed regret that though they had the closest contact with members of their communities, they were sidelined in the decision making processes in matters of governance and developments.

This came to light during an engagement by the Voice for Change (V4C) Advocacy Programme with female traditional leaders of Awutu Beraku and Awutu Senya East districts in the Central Region on Friday to find ways of dealing with the sanitation and hygiene problems in their communities.

The meeting, therefore, sought to assess the critical roles played by traditional authorities in sanitation and hygiene service delivery and management.

The V4C Partnership Programme is an evidence-based advocacy being implemented by SNV (Netherlands Development Organisation) in partnership with the International Food and Policy Research Institute and funded the Dutch Ministry of Foreign Affairs.

The five-year programme is being implemented by SNV and its partner Civil Society Orgnisations (CSOs) in Ghana and other developing countries.

It aims to strengthen the capacities of local CSOs to generate reliable and relevant data and carry out evidence-based advocacy for sustainable development in key focus areas.

These are Renewable Energy, Water, Sanitation and Hygiene (WASH) and Food Security and Nutrition.

The Ghana WASH component of the project, dubbed: “Ghana Sanitation and Hygiene for All (SH4ALL), is directed at intensifying the voice of CSOs and the citizenry to demand more equitable, affordable and sustainable sanitation and hygiene services and improved policy implementation at the district level.

Others are Community-based Organisations, assembly members, unit committees and the media.

Intervention Forum (IF), a non-governmental organisation, is one of four local implementing partners under the WASH Component in Awutu Senya East Municipal and Awutu Senya District assemblies.

Madam Nora Ollennu, the Chief Executive Officer of IF, told the queenmothers that the V4C Programme recognised the roles and contributions by traditional heads in the provision and management of equitable and sustainable sanitation and hygiene services.

The engagement, she said, was of strategic importance not only to the project but also to the attainment of safe sanitation, cleaner environments and improved health and living conditions for the citizens
and commended the two assemblies for the high level of responsiveness to the initiative.

She said assembly and unit committee members were not happy about the constraint in mobilizing citizens for community cleanup exercises as well as the growing apathy levels among citizens.

This, she noted, had led them to appeal for the passage of customary laws by traditional heads to support them to carry out effective sanitation exercises.

Stephen Kwame Quaye, the District Chief Executive of Awutu Senya West, expressed the need for the people to continue with the age-old practice of good sanitation in the communities.

He expressed worry about the growing heaps of waste in the communities and urged all to help in dealing with the situation.

“We have decided to spend money on sanitation and we shall, in collaboration with traditional authorities, especially our queenmothers, pass sanitation bye-laws to ensure proper sanitation in our communities,” he said.

During an open forum, the quuenmothers, led by Naakye Dode Akaabi XIV, Paramount Queenmother of Awutu Traditional Area, called for the institution of communal labour to rid the communities of filth.

She called for stiff punishment for sanitation offenders, devoid of favoritism, adding that they should be fined to serve as deterrent.

He said the Assembly was coming out with bye-laws that would compel all persons putting up houses and structures to provide toilet facilities within their premises.

Model public toilets would, however, be provided by the Assembly to cater for travelers and visitors, and urged all to comply with this directive.

Mr Boateng said Ghana was classified by the World Health Organisation as having performed very poorly in its open defecation assessment, and implored the traditional leaders to help reverse this trend.

Awutu Senya DCE Calls for Unity Amongst His Communities

Ghana Post and Google Have No Dealings in NDPAS