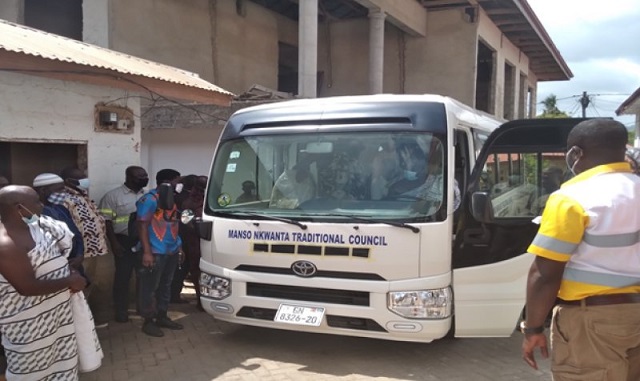 Rabotec Group, one of the contractors of Asanko Gold, a gold mining firm operating in the Amansie West District, has donated a brand new bus to the Manso Nkwanta Traditional Council.

The company which provides haulage and other services for Asanko Gold donated the bus as part of the company’s corporate social responsibility to the traditional council.

A team of officials from the company led by its Chief Executive Officer (CEO), Mr. Ali Ibrahim presented the bus to the Council at a brief ceremony at Manso Nkwanta.

Mr. Ibrahim said the donation was to facilitate the easy movement of members of the Council in the performance of their traditional duties.

He said the company had been supporting communities within the Manso enclave in diverse ways with education receiving much attention from the company.

“My main focus is on education because what I believe in is educating the little ones so that in the near future the majority of the workforce for mining companies in this area would be indigenes”, he stated.

He said Rabotec was taking steps to engage more locals going forward to ensure about 80 per cent of its workforce including artisans, general labour, operators, and management were recruited locally.

“This is why we are investing heavily in education to build a strong human resource base that we can tap into to improve the local economy as more people get decent jobs”, Mr. Ibrahim noted.

He said the company also supported the vulnerable and aged in the area during festive seasons such as Christmas and Ramadan with food items, saying that it would continue to give back to society as long as the company was in operation.

Nana Bi-Kusi Appiah, the Paramount Chief of Manso Nkwanta, applauded the company for the donation which signified its appreciation for the cooperation and support for the operations of the company.

He encouraged the company to invest in infrastructure in the areas of education and health to serve as legacies which the company would be remembered for even when they leave the area.

He assured the company of the traditional council’s support for their operations and called for more interventions to improve the lives of the people.