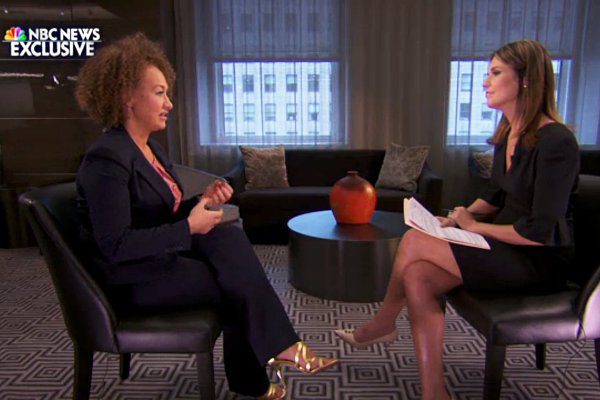 Rachel Dolezal continued to identify herself as black though she was born white. In an interview with Savannah Guthrie on ?NBC Nightly News? on Tuesday, June 16, she admitted that she only lied about her race to survive or protect the people that she loved.

When the host asked her whether she ever lied about her race, Rachel gave an answer leading to the definition of race as in ?human? race instead of ethnicity. ?No, I have never been asked, ?Are you human or non human?? ? she said.

?There have been moments of some level of creative nonfiction where, in order to survive or protect people that I love, I have had to explain or justify some of the timeline and logistics of my life in a way that made sense to others,? the former NAACP chapter president continued after the host asked whether she had ever been deceptive to anyone. ?So I?ve tried to find words that have been able to communicate my reality to people that I?m talking to understanding what their perceptions of the definitions of race culture and ethnicity might be.?

When Savannah asked the race activist whether she realized that identifying herself as black, given her parents and heritage, could be ?misleading,? she said, ?I can understand it?I haven?t had DNA test.? Accused of doubting such fundamental matter, Rachel defended herself as saying, ?I?m not necessarily saying that I can?t prove they?re not, but I don?t know that I can actually prove they are. The birth certificate was issued a month and a half after I was born. And certainly, there are no medical witnesses to my birth.?

?I am black,? she admitted. ?Nothing about being white describes who I am.? She then explained how she could relate her experience to that of transgender community after she read Caitlyn Jenner?s profile in Vanity Fair. ?I cried because I resonated with some of the themes of isolation ? of being misunderstood, especially in this very high-pressure, high-risk, low-trust, pressured, stressed, even borderline attacked experience in my life right now,? she said.

Earlier that day, Rachel also appeared on NBC?s ?Today? show. Similar to her statement during the interview for ?NBC Nightly News?, she identified herself as black and admitted that from around the age of 5 she was ?drawing self-portraits with the brown crayon instead of the peach crayon and black curly hair.?

Rachel?s mother, Ruthanne Dolezal, denied her daughter?s statement as she said, ?We did not see any kind of representations of her? to that sort of identity.? She calimed that her daughter?s story was ?not rational? and ?not consistent? given that Rachel once sued Howard University for discrimination against her for being white. On a final note, Ruthanne said, ?It?s disappointing to see that Rachel is still making false statements. I was hoping to see a change.?

Rachel resigned on Monday, June 15, from her position as the head of the NAACP chapter in Spokane, Washington, amid allegations she lied about her race. Misrepresenting herself by claiming that she was black and earning a leadership position in one of the nation?s top advocacy groups for African-Americans, she caused a social media firestorm when the news broke last week.