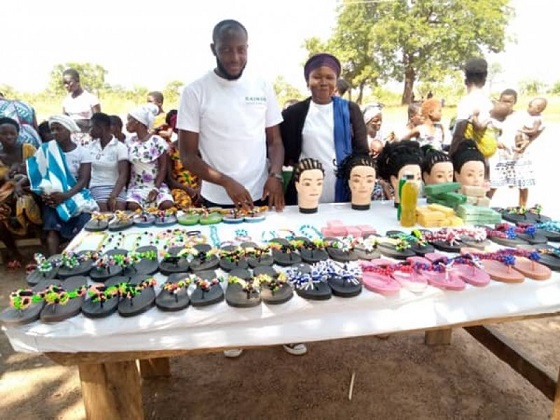 A total of 554 highly marginalised girls in the Nanumba South and Kpandai Districts of the Northern Region have acquired self-employable skills to empower them economically to earn living.

The girls first went through literacy, numeracy and life skills sessions for six months and then transitioned to the vocational skills training for another six months in the areas of beads, soap and sandals making, and hair braiding.

This intervention was under the Strategic Approaches to Girls Education (STAGE) project being implemented by the Regional Advisory Information and Network System (RAINS), a non-governmental organisation, with funding from Foreign Commonwealth and Development Office.

Separate ceremonies were held at Tampuaya and Jagbingbindo communities in the Nanumba South and Kpandai Districts respectively to present certificates to the girls to officially graduate them from the project to pave way for them to start their own businesses.

Mr Hardi Tijani, Executive Director of RAINS, who spoke during the graduation ceremonies at the communities, explained that the project was aimed at helping girls, who had never been to school or girls, who dropped out of school before primary four, to become functional literates and to provide them with vocational and technical skills in their own chosen areas to earn a living.

Mr Tijani expressed appreciation to all stakeholders in the districts for their support as the project was anchored on partnership and collaboration with various departments at the district level.

He advised the beneficiaries to take their skills seriously and to continue learning to perfect their skills to improve their performance.

Mr Nurudeen Ibrahim, Nanumba South District Director of Community Development and Social Welfare encouraged the beneficiaries to make good use of the skills they acquired to ensure that the impact of the project was felt in the entire district.

Mr Ibrahim further expressed gratitude to RAINS and World Education Incorporated for implementing the project in the area, which would help to improve the standard of living of the beneficiaries and the district as a whole.

Mr Mohammed Bawa, Deputy Director of Non-Formal Education Unit at the Nanumba South District was happy that the project had helped the girls to acquire literacy and numeracy skills, and said it would help them to excel in their chosen vocations.

Madam Abdul Wahab Ragadahu, Project Manager at RAINS spoke about the value of the certificates given to the beneficiaries saying “Being the first of its kind and signed by the National Vocational Training Institute (NVTI), these certificates give recognition to the girls as registered members of the NVTI and place them on a higher pedestal as compared to other persons, who may have gone through skills training in similar trade areas.”

Naa Dawuni Nanundoo, Chief of Tampuaya expressed gratitude to RAINS for extending the project to his community saying the opportunity given the girls would make them to stay in the community instead of travelling down south to engage in menial jobs.

Ms Mbanyi Limantol, one of the beneficiaries from Jagbingbindo community in the Kpandai District, who learnt hair dressing, said she was now able to braid hair for people to earn income, which supported her to access sanitary needs for herself instead of relying on her parents.

She added that she was now able to read and write in her own language due to the knowledge she gained from the lessons of the project even though she had never been to school.

The girls exhibited some of their products during the graduation, which included beads and sandals, liquid soap, bar soap, and braided hair.