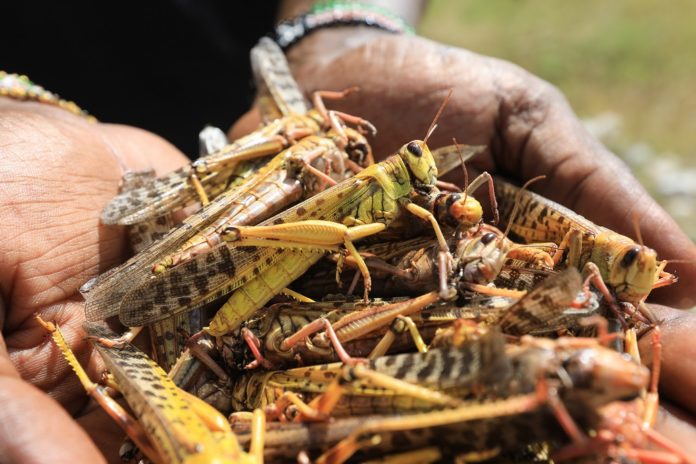 Kenya is experiencing a new round of locust infestation following the onset of the long rain season, which has seen vegetation flourish, giving the insects a new lease of life.

Swarms of locusts are ravaging crops in parts of northern Kenya, central and breadbaskets in the Rift Valley, putting the east African nation at risk of food scarcity at a time when the country is battling COVID-19.

The Food and Agriculture Organization of the United Nations (FAO) describes the current situation in Kenya and other parts of east Africa as extremely alarming.

Kenya, Ethiopia and Somalia are among the countries in the region that are facing the severest attacks as the swarm numbers increase.

“Widespread rains that fell in late March have allowed a dramatic increase in locust numbers in east Africa. The current situation remains extremely alarming as hopper bands and an increasing number of new swarms form in northern and central Kenya, southern Ethiopia and Somalia,” notes FAO in its latest update on the crisis seen Tuesday.

The organization forecasts that an increasing number of swarms will form and mature this month in Kenya’s central and northern counties.

“A second generation of breeding will commence in early April as mature swarms lay eggs that will begin to hatch by the end of the month. Laying, hatching and band formation will continue. Most of the breeding is likely to be concentrated in northern counties of Turkana, Marsabit, Samburu and Isiolo,” observes FAO.

Therefore, when there is plenty of rain and green vegetation develops, desert locusts can increase rapidly in number and within a month or two, start to concentrate and become gregarious.

Most parts of the east African nation are currently experiencing heavy rains, which have displaced hundreds of people and destroyed property in some places.

The current rainy season, normally the longest, would run from March to May, according to the meteorological director Stella Aura.

The rains started early in mid-March, leading to the growth of a variety of vegetation, even as it ushered in the main planting season with most farmers growing maize, the country’s staple.

It is these crops that are currently under threat in the east African nation, according to the UN organization.

“I lost most of my crops, including vegetables and napier grass, to locusts last month,” said James Njenga, a farmer from Menengai in Nakuru County.

The county is one of those affected by the locusts in recent times, with the ravenous insects sweeping across most of the sub-counties of the region, including Menengai, Free Area, Ol-Rongai and the Nakuru National Park.

“The brown insects descended on our crops in thousands and we were helpless. The county government helped us spray them, they left but we fear they may come back,” said Njenga, his plight representing that of millions of farmers across the east African nation.

The locusts have attacked at least 18 counties, including Samburu, Isiolo, Marsabit, Mandera, Turkana, Laikipia, Meru and Embu, with the first four being the worst affected.

During the first invasion that started late 2019, FAO estimated that the insects ravaged crops over 100,000 hectares of vegetation in Kenya.

The east African nation has stepped up both ground and aerial spraying of the insects in the last months, getting support from both FAO and the World Bank.

“We are working to increase spray aircraft to at least 20, half of which will be for spraying and the rest for surveillance. We are also acquiring over 100,000 liters of pesticides for the exercise,” said Peter Munya, the agriculture minister, on March 26.

The current invasion, FAO however notes, represents an unprecedented threat to food security and livelihoods in Kenya because it coincides with the beginning of the long rains and the planting season.

“Although ground and aerial control operations are in progress, widespread rains that fell in late March will allow the new swarms to mostly remain mature and lay eggs while a few swarms could move from Kenya to Uganda, South Sudan and Ethiopia,” warns FAO.

Beatrice Macharia, an agronomist with Growth Point, an agro-consultancy in Kajiado County, observed that the locust invasion remains not only a threat to Kenya’s food security but also to the fight against COVID-19 since people may find it harder to stay home to maintain social distancing if they do not have food. Enditem