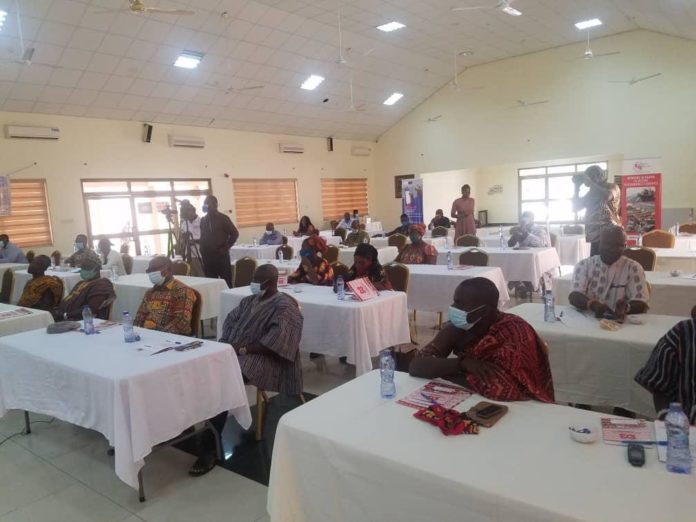 The Land Use and Spatial Planning Authority (LUSPA) has stressed the urgent need for a comprehensive land use planning along the coast of the country to ensure that spaces were earmarked for fishing activities.

This, the Authority explained, must be holistically pursued to ensure the sustainability of the fishing industry considering the rapid haphazard development of beach-fronts into resorts, pubs and entertainment joints.

Mr Frank Martey Korli, Central Regional Director for LUSPA who made the call, noted with concern that the country’s beaches were increasingly becoming smaller for its fishermen due to other competing needs along the coast coupled with the rising levels of the sea.

He lamented that the tourism industry was gradually taking over and pushing the fishing communities out of business, a situation he said would have dire economic consequences on the nation if not checked.

Contributing to discussions at a workshop on securing landing sites under the ‘Far Dwuma Nkodo’ project in Cape Coast, Mr Korli called for a rapid approach to ensure that fisher-folks did not loose their livelihoods.

“There is the need for us to make sure that we specifically earmark places for fishing activities and other livelihoods that are fishing related,” he said.

It brought together stakeholders including chief fishermen, fishmongers, traditional leaders and representatives of the Fisheries Commission, and LUSPA.

It was among others, to solicit inputs on the processes involved in securing landing sites and document them to serve as a guide for land acquisition along the coastal areas of the country.

Mr Korli lauded the efforts of EJF and Hen Mpoano to safeguard fishers’ access to landing sites, saying it was one of the best things to happen to fisher-folks in this era of competing needs at the beachfront.

“Every development has spatial implications and for that matter there is the need to secure their space of operation,” he stressed.

Mr Socrates Segbor, Fisheries Programmes Manager of EJF, said if care was not taken, many beachfront developments would happen at the expense of the fishing communities that depended on them for their livelihoods.

In that regard, he said it was imperative to use existing land ownership and documentation processes and regulations to secure the beachfront to sustain the livelihood of fishers.

He said the workshop offered the platform for stakeholders to discuss, identify possible gaps and formalize informal arrangement in the respective landing beaches to reach agreement between either the fishers and the traditional authorities or the government on granting them usage rights of the landing sites.

He said the Far Dwuma Nkodo project has for the past four years engaged fishermen and fishing communities in the Central Region and Volta Estuary on activities aimed at helping them to secure usage rights to their fish landing sites.

He said the project has carried out extensive mapping of 118 landing sites along the coast of the country as the first step in protecting the sites from being taken over by the numerous competing land users.

He said British Komenda was selected as a case study for the pilot project due to potential threats arising from planned works under the sea defense and erosion project and associated tourism and other development, which may compete with existing usage of the beach front.

Mr Kofi Agborga, Director of Hen Mpoano, underscored the importance and relevance of the fisheries sector to the socio-economic development of the country and said it would not be out of place to take steps to secure the landing sites to sustain the livelihoods of fishermen.

Participants at the workshop suggested to EJF and Hen Mpoano to include the various district assemblies and other government institutions in their efforts to secure the landing sites for the fishing communities.

Neenyi Ghartey VII, the Omanhen of Efutu Traditional Area who chaired the event called for greater consultations, collaboration and voluntary contribution from stakeholders for the project to achieve its objective.