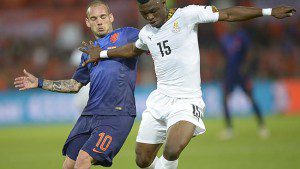 Ghana defender Rashid Sumaila has hit back at a spiritualist who made an astonishing claim that the Kuwait-based player was responsible for the injury suffered by his Black Stars team-mate Jerry Akaminko ahead of the 2014 World Cup in Brazil.

Mallam Issaku Salia made the shocking claim on Tuesday that the Kuwait-based defender approached him ahead of the tournament in Brazil to eliminate Akaminko through injury to enable Sumaila make the final 23-man squad.

The spiritualist publicly branded the former Asante Kotoko defender a bad player who uses spirituality to afflict his colleagues with injuries even though there is no evidence of other players competing him Sumaila getting injured in their careers apart from Akaminko.

But the talented defender has denied the allegations saying the spiritualist is only using his [Sumaila] name to be famous.

“I am a staunch Muslim and I don’t engage in that. I am shocked because I don’t know what he is talking about,” Rashid told GHANAsoccernet.com

“How would I even want to do that when we were only four defenders in the team? I believe in my prayer as my weapon and I pray five times a day. So what at all will I be seeking from a spiritualist?, the player who is cleared disturbed by the report said.

The former Sundowns defender added that he does not even know the said spiritualist who claims he is the cause of Akaminko’s predicament.

“Wallahi I don’t even know him. I just heard the news this morning and I was shocked.”

“I have never been to any spiritualist in my entire career before so he should come again.”

“This man only wants attention and is trying to pitch me and Jerry at each other. But Allah will punish him.”

The defender concluded that Malam Isaku Salia is only an attention seeker and muat not be taken serious.

“He want to make a name for himself but I think he has chosen the wrong person. He only wants attention and is just trying to use me. My Allah will fight for me,” Rashid retorted.

Jerry Akaminko’s injury laid him off for close to nine months, thwarting his World Cup dream with the Black Stars.