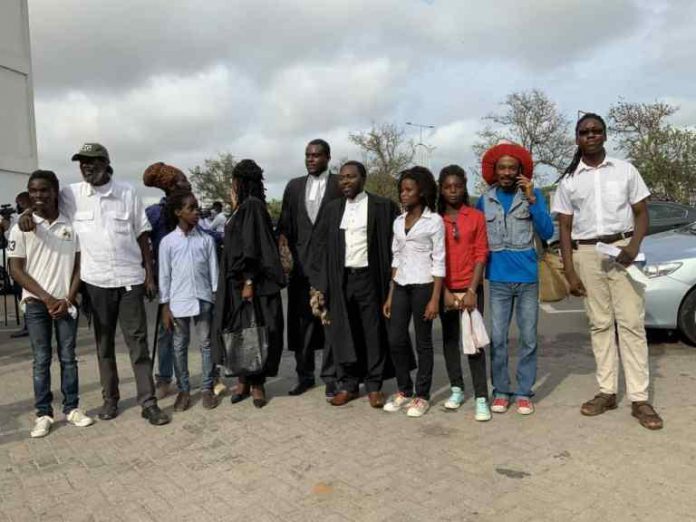 She said what had the wearing of dreadlocks, which was the manifestation of one’s religious rights, got to do with upholding discipline in the school?

“To maintain that a person must cut his or her dreadlocks, which is the manifestation of his or her religion, before admitted into the school, sins against the 1992 Constitution,” the Judge said.

Justice Addo said she rejected the argument of the respondents that upholding the reliefs of the applicant would discriminate against other students who abide by the rules of the school.

She said the fundamental human rights were not absolute and could be limited by statutes and policies but” this must be juxtaposed with the public interest as in this current case and what reasonable justification has been put before this court in the implementation of the school rules to convince the court to rule in favour of the respondents?”

The Judge said the ultimate aim of the rules was to enhance discipline and academic excellence but what would be the effect on the school community if the applicant was allowed to keep his dreadlocks?

The Court said the ultimate aim of the rules of the School was omnibus and “I am unable to see the disadvantage to the School community in allowing the applicant to keep his dreadlocks.”

She said ordering the applicant to cut his dreadlocks which was the manifestation of his religion which was Rastafarianism and his culture discriminates against his fundamental human rights and this would not be countenanced by this Court.

The failure and refusal by the School to admit the applicant because of his dreadlocks which was the manifestation of his religion was a violation of his fundamental human right and also violates his right to education.

She said the order directed at the applicants to step aside during the registration exercise because of their dreadlocks was breach of their dignity and no rightful basis had been provided by the school to interfere with the religious rights of the applicant.

No order was made for any compensation due to the future relationship between the applicant and the school.

Master Marhguy sought the Court to declare that the failure and or refusal of the school to admit or enroll the applicant on the basis of his Rastafarian religious inclination, beliefs and culture characterised by his keeping of Rasta is a violation of his fundamental human rights and freedoms guaranteed under the 1992 Constitution, particularly Articles 12(1); 23; 21(1) (b) (c); 26(1)); and 17(2) and (3).

The Applicant wanted the Court to declare that the failure and or refusal of the school to admit or enroll him on the basis of his Rastafarian religious inclination, beliefs and culture characterised by his keeping of Rasta is a violation of his right to education guaranteed under Articles 25(1)(b), and 28(4) the 1992 Constitution.

He prayied the Court for a declaration that the order directed at him by the representative of Achimota School to step aside during the registration process on the basis of his religious belief characterised by the keeping of Rasta is a violation of his right to dignity guaranteed under Articles 15(1) and 35(4), (5) of the 1992 Constitution.

A declaration that there is no lawful basis for the school to interfere with the applicant’s right to education based on his Rasta through which he manifests or expresses his constitutionally guaranteed right to religion and to practice and manifest the same.

He further urged the court for an order directed at the school to immediately admit or enroll the applicant to continue with his education unhindered.

The applicant asked the court for an order directed at the respondents to jointly and severally compensate the applicant for the inconvenience, embarrassment, waste of time, and violation of his fundamental human rights and freedoms.