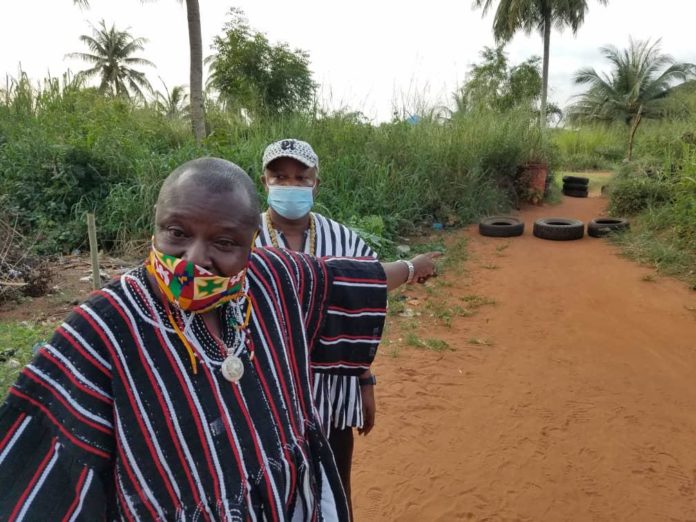 Togbui Amenya Fiti V, Paramount Chief of Aflao Traditional Area has accused authorities of the Republic of Togo of bad faith in extending borderline into Ghana land space and called for a “re-demarcation” of the frontier.

He said the long and deep trench constructed along the Ghana side of the border by the Togolese officials, hundreds of meters beyond the designated borderline, was a recipe’ for conflict and must be corrected.

He said the trench dug between Wudiaba and Aflao within Ghana’s land space was preventing residents from doing their normal businesses, which is compounded by the presence of the military deployment and consequent road blockade.

“By this, residents on the side before the trench cannot have access to their compatriots beyond the trench as Ghana’s military have also erected barriers and preventing people within Ghana from crossing into Aflao Town or elsewhere.”

The Paramount Chief raised the concerns when the Standing Committee of the Volta Regional House of Chiefs undertook a tour of border communities in the Region. He said “this is act of provocation.

“We have no protector, so the Togolese government comes to ward-off my people. The border they are creating is on Ghana’s land, we know the traditional borderline and these people are callously intruding with impunity.

“The main boundary is far down there and government has to re-demarcate Aflao lands,” he said as he showed the Committee led by Togbe Afede XIV, President of the National House of Chiefs round border posts and security installations in the Ketu South Municipality.

The Committee was shown a barrier placed in the heart of the Wudiaba community.

Togbui Nyakeli Tortsofia VII, Chief of the area said military officers had been operating the barriers every night for the past two months, and that residents could not enter the community whenever they were present.

The Committee had earlier toured border security posts in the Afadzato South, and the Ho West Districts.

Officers of the Ghana Immigration Service stationed at the border at Leklebi Kame in the Afadzato South District, confirmed that the siting of the security post away from the border affected frontier communities during the closure.

Traditional authorities in the districts confirmed some tensions, as well as alleged acts of intimidation reported by residents in communities, where the military had been deployed, but said there had been no incidences or reports of violence.

Togbe Afede, who also is the Agbogbomefia of Asogli State, called for a human face approach to the border closure, and said authorities must ensure that livelihoods were not affected.

He urged security officers to sympathize with the people, and work towards maintaining national unity and cohesion.
Togbe Afede called for peaceful conduct especially in the runoff to the elections, and urged all to register and to vote, saying both were “very important”.

Nana Soglo Aloh IV, Paramount Chief of Likpe Traditional Area, and President of the Volta Regional House of Chiefs said it was the Committee’s resolve to tour border communities to ascertain the accuracy of news flooding social and mainstream media regarding the military deployment.

Osie Adza Tekpor VII, Paramount Chief of Avatime Traditional Area and a member of the Committee assured traditional leaders of affected communities of the support of the House of Chiefs, and promised that consensus would be attained.