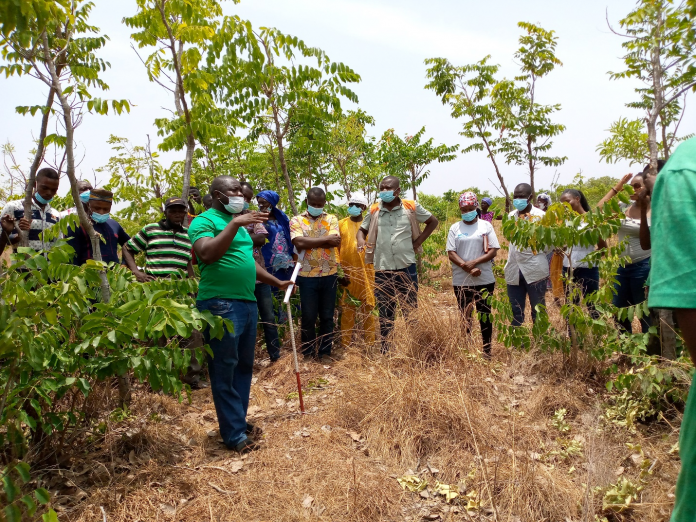 The aim of the learning visit was to motivate and inspire beneficiary farmers to adopt additional restoration practices for replication in Bawku West, Garu, Tampane in the Upper East Region and Mion District in Northern Region.

The first day of the exchange visit-saw participants visit Talani, Latagim and Bungbali communities in the Yendi Municipality, who were educated on how nutrition gardens were established with emphasis on tree based vegetable mainly Moriga and Baobab.

Farmers from Bawku West, Garu, Tampane and Mion District were exposed to the riverine buffer zone policy at Bungbali and Neyeiodo communities on the second day of the field visit and were educated on appropriate distance for applying the buffer zone policy to avoid siltation of river bodies while ensuring that water was maintained all year round.

They were told that no agriculture activity was allowed within 100 meters buffer had first- hand practical experience as to how to Permanently Monitor Plot (PMP) method work to assess tree survival rate, diversity and general development of trees.

Mr. Edward Akunyagra Project Manager of World Vision Ghana interacting with farmers at Lagagim said the Upper East had severe land degradation problems and it was estimated that 35 percent of the country’s desertification challenges was occurring in there.

According to the Project Manager that had rendered once fertile lands unproductive and reduced regenerative capacity of important local vegetation and farmlands, forest, woodlands, water bodies and grasslands were degrading due to prolonged droughts and sedimentation of water bodies.

Mr. Akunyagra said the situation could change with the implementation of the Re-greening Africa project supported by the European Commission and implemented by the World Vision Ghana, Catholic Relief Service and the World Agroforestry Centre (CRAF) in Ghana.

He said to achieve that, a number of community led initiatives were underway with the aim of influencing farmers to take up land restoration, technologies to reverse degraded lands.

Mr. Akunyagra and consortium lead for the project in Ghana expressed appreciation to Tree Aid for opening up their doors to allow for knowledge exchange.

Mr. Robert Atawura, a Project Coordinator of Tree Aid revealed to the participants that, the most appropriate way of processing the vegetables was to oven dry (dry shade) them to ensure that the high nutrition value of the vegetable were maintained and provided the high levels of nutrition that was required for human consumption.

He said the main aim of establishing forest plants was to maintain a dense tree population to help in carbon sequestration, provide firewood for women, rafters, and other building materials and subsequently improve their general wellbeing.

The 42 farmers expressed excitement about the new learning they had acquired and were optimistic that the new knowledge acquired would them in their future endeavours.

Basic school children given education on values of nationalism

Gov’t should regulate sale of foodstuffs at farm gates – farmers